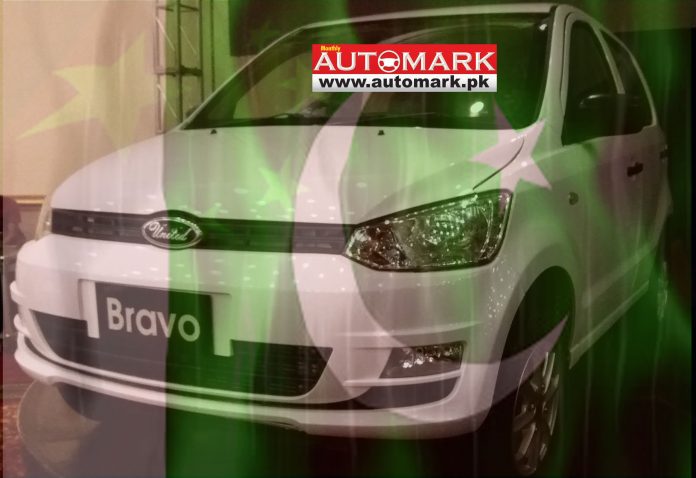 The United Motors has launched its first 800cc United Bravo passenger car in Pakistan. The launching ceremony was held on yesterday in a local hotel of Lahore where automobile dealers, motorcycle dealers of United Bikes, Government officials from EDB, president LCCI, different vehicles associations representatives of media and many other guest were present, while Chief Guest was Hafiz Mumtaz, Provisional Minister of Excise and Taxation.

The hatchback automobile comes with a 3-cylinder water-cooled engine producing 40 BHP and 60 NM torque and a 4-speed manual transmission. The body type is 5 – door Hatchback. The seating capacity is 5 persons and fuel tank capacity is 30 L. For your comfort, the car is also equipped with an air conditioned.

Other features include rear parking camera, alongside seat-belt warning indicator and a remote keyless system. For safety, there is a seatbelt, back foor lock and steering lock. United Bravo comes with a price tag of 850,000. The car is available in three colours; White, Silver and Grey.

While on sideline of the event MD of the United Motors Sana Ullah Chodhary told Automark that Car will be available at our 3S dealers across country within next few days while more dealers are almost ready to receive Bravo cars too. Plant capacity of the car is 35,000 per year in single shift for only Bravo cars.

There was a lot of hype and speculation has been created about this car, mainly because it was believed that United Bravo will break the monopoly of other companies by introducing a price affordable car in the country.