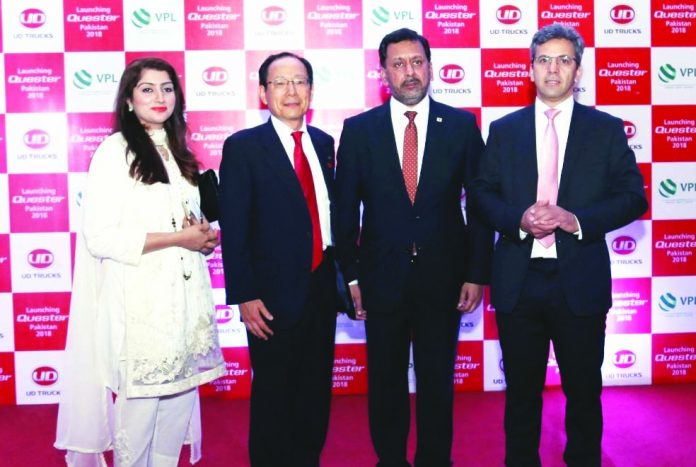 UD Trucks has introduced their popular new heavy-duty truck model Quester in the Pakistan market for which they have appointed VPL Limited (VPL) as their authorized importer. The launching ceremony was held on 29th June at Karachi Expo Centre. Takashi Hakada (Director Public Affairs, Embassy of Japan) addressed the people in the ceremony. The unveiling of Quester created hype among the audience who were eagerly waiting for its launch since its announcement early this year.

Waqar Asghar, CEO VPL while talking to media said: Heavy duty Quester truck is specially designed to target the emerging markets and Pakistan is one of them. As we see that Pakistan’s GDP is increasing, new projects are being started, CPEC is growing and in such scenario, we need heavy trucks which further improves the industrial development. He said UD Trucks will be a game changer for Pakistan’s industrial development as they have quality, quantity, low fuel consumption and durable as well. Moreover, they meet the safety standards of OGRA and are being manufactured in Thailand by using Japanese technology. Quester features and specifications comply 100% to OGRA and NHA safety regulations. Quester is available with factory fitted ADR package as an option. The ADR package includes a battery safety switch and insulated terminal and lamps.

Commenting from the launch, Mourad Hedna UD trucks President in the MEENA region: “We are very excited about the arrival of the Quester range in Pakistan. With the new Quester, we have now built on our tradition of reliability and durability, to launch our new customer promise, ‘going the extra mile’. “I am confident that Quester will be a big game-changer for UD Trucks and VPL, our partner in Pakistan. More than 400 full-time experts from around the world, with extensive knowledge and ‎experience, have been involved in designing, developing and validating ‎Quester and its associated services”. The team has spent over a million engineering hours and ‎‎65,000 tests hours to build the ultimate trucking machine’’.
Quester has wide range of different product types such as 4X2T, 6X2T, 6X4T for long haul, 6X4R long chassis for regional distribution, 6X4 and 8X4 tippers for heavy duty construction and mining applications. The 6X2T and 6X2R configurations are available with a bogie lifting axle which is used to lift the axle in the unladen condition. The lifting function on the third axle gives the truck better traction when activated. It also gives better fuel consumption, extended tyre life and a smaller turning radius. It can be supplied with bogie press which is used when higher traction is required.

UD Trucks is a leading Japanese total transport solution provider. The company was established in Japan in 1935 and became a part of the Volvo Group in 2007. UD Trucks has a long and proud history in Pakistan. UD Trucks (previously known as Nissan Diesel) was the first Japanese truck brand to enter the Pakistan market and has since then continued to be one of the leading players in the country. UD Trucks are a familiar sight on the roads of Pakistan and hold a prominent position in the long-haulage and construction segments.

VPL is a leading importer of trucks, buses, construction & mining equipment, generators and tools in Pakistan with a countrywide after-sales support network. VPL is also the authorized importer of Volvo Trucks, Volvo Buses, Volvo Construction Equipment and Volvo Penta. VPL is part of the Panasian Group, which has been responsible for the Volvo business in Pakistan since the mid-1970s.