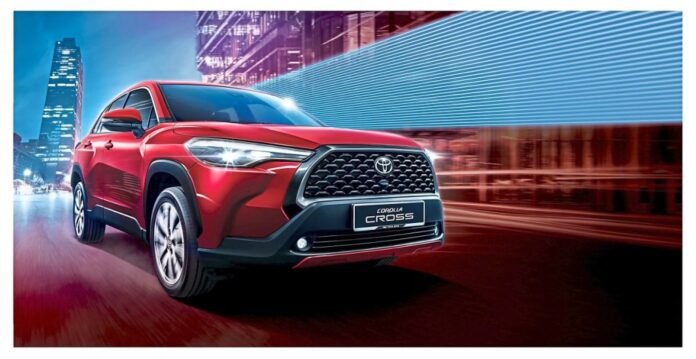 The new model will be imported as a completely built-up unit from Thailand before local production starts later this year.

“In wasting no time, we are accelerating into 2021 with new drive and synergised mobility. The new Toyota Corolla Cross enters the ever-growing modern SUV segment, catering to a new generation of mobile adventurous consumers.

“We are confident that it will prove to be yet another winner as it is ideal for today’s active lifestyles,” UMWT President Ravindran K said in a statement yesterday.

The Corolla Cross is built around the Toyota New Global Architecture (TNGA), a structure and platform that allows more engineering flexibility.

With TNGA, a lower centre of gravity can be achieved to improve stability while the highly rigid body enhances agility and ride comfort.

Compared to the Corolla sedan, the Corolla Cross has a marginally shorter body with an overall length of 4,460mm.

The engine is matched with a seven-speed sequential shiftmatic CVT transmission that improves performance with an electronically-controlled throttle to provide responsiveness, smoothness and quietness.

UMWT Deputy Chairman Akio Takeyama said initial market studies have shown that there is a strong and positive response to this new type of Corolla.

“This response is not surprising as there is great demand for SUVs globally. As such, we will have this model assembled locally around the end of this year,” he said.

The Corolla Cross has a dominant speedometer in the middle within a 4.2-inch colour multi-information display.

Besides that, it has a nine-inch display in the middle of the dashboard with Apple Carplay and Android Auto-ready connectivity.

A full five-year with an unlimited mileage factory warranty is provided as well as an assurance of nationwide after-sales support with readily available genuine parts.