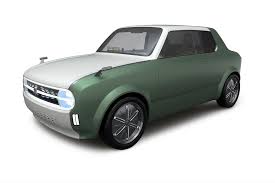 Suzuki may no longer sell vehicles in North America, but it’s still a significant player in the global automotive industry. The Japanese automaker, which makes cars, motorcycles, outboard boat engines and probably plenty of other things we’re not even aware of, will have two concept vehicles on display at the upcoming biannual Tokyo Motor Show.

According to Suzuki, the theme of its display this year is, “Waku Waku Switch for Everyone: Excitement for you, excitement for everyone.”

As for the actual concept vehicles that will be unveiled, the first one is called the Waku Spo. An A-segment two-door car with some cool retro touches, it’s billed as a compact personal plug-in hybrid electric vehicle. Its two-tone paint, fender-mounted side-view mirrors (though with this design study they more likely house cameras), nearly filled-in wheel faces and truncated rear make for an undeniably charming package. According to the announcement, “With this one car, the family can share fun and excitement across generations, for daily use as well as for pleasure.”

The Waku Spo also features a body that can change shape, alter the front mask and even switch up the content shown on its dashboard. It can “transform to meet each and everyone’s fun and excitement.”

Hanare is the name of the second design study Suzuki plans to display in Tokyo, its name apparently meaning “detached cottage” in Japanese. It is, arguably, more interesting that the Waku Spo. Described as a self-driving mobile room, this autonomous vehicle prioritizes comfort and efficiency. Ostensibly, its interior is sprawl-out spacious.

Looking essentially like a box on wheels, this concept car also appears quite retro, like an oddly proportioned Volkswagen bus of decades past. The front end has been almost comically minimized and the wheels pushed out to the extreme corners of its body, likely in a bid to maximize cabin space.

The Hanare could bring “new delight in owning a car.” As a lounge space on wheels, it could also enable passengers to enjoy their vehicles in new ways, ways that don’t involve driving.

Electric Cars – Do they have a future in Pakistan?