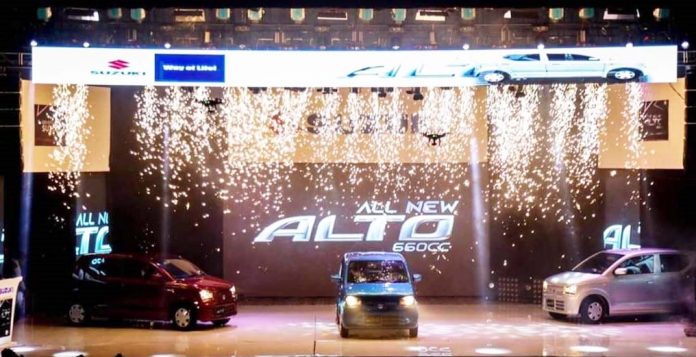 Pak Suzuki launched its locally manufactured passenger car which was previously introduced in the market back in April 2019 at the Pakistan Auto Show. The brand new 600cc car has a R-series engine, with a modern exterior and interior both. There are three variants of this Alto; Alto VX which is without AC, Alto VXR which is with AC and Alto VXL AGS which has AC and automatic transmission.

This is the first time for Suzuki to manufacture vehicles with engine displacements of up to 660 cc overseas. Using the same body and engine as the Alto currently sold in Japan, the model launched in Pakistan is being assembled at Suzuki’s Karachi plant. Before the launch of the new model, Suzuki used the same Alto body but with 800 cc to 1,000 cc engines.

The new Suzuki Alto is well equipped and has focused on enhancing its safety features, such as having Dual Front SRS Airbags, Anti-lock Braking System and keyless entry with immobilizer. Moreover, there are even more advanced features available for those willing to amp up their requirement of technology in the car such as power steering, electronic windows, electrically adjustable side view mirrors and touch screen multimedia.

It claims to be a fuel efficient car which has been launched in the place of the 800cc Mehran. The company is offering a three-year or 60,000km warranty. The new Alto will be displayed at over 165 Pak Suzuki dealerships in more than 95 cities nationwide.

IMPACT OF ADVANCED EMISSION STANDARDS ON IMPORTS OF CONSTRUCTION, AGRICULTURAL AND...