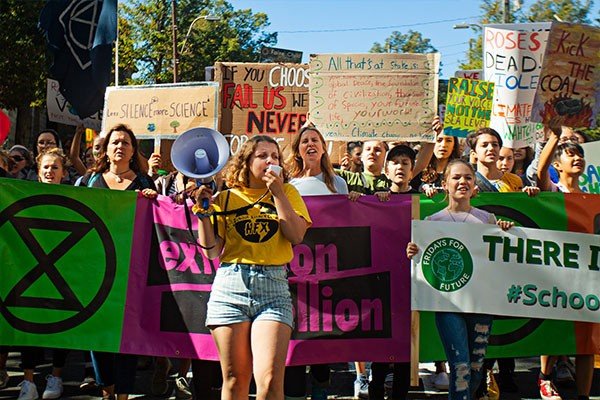 Although the only discussion now should be about solutions and how to implement them quickly, some people in and out of the political sphere still refuse to accept the massive amounts of evidence for human-caused global heating and the need to address it.

Politicians are finally talking about climate change. How could they not? In Canada, more than 800,000 young people and their supporters took to the streets on September 27, joining more than 7.6 million worldwide, to demand that adults take the crisis seriously.

It was exhilarating to see half a million people marching in Montreal, more than 100,000 in Vancouver, over 10,000 in Halifax and many smaller marches throughout the country. But is it too little too late?

Every day we stall means emissions continue to rise, making it increasingly difficult to avert the worst consequences. We’ve already pumped so many greenhouse gases into the atmosphere and destroyed so many carbon-storing natural areas that the planet would continue heating even if we halted emissions immediately.

For decades, everyone has been speaking about the need to conserve energy, shift to renewables and protect natural spaces, all while being told the transition won’t happen overnight. Meanwhile, over many nights and days, Canada has continued to expand fossil fuel development and infrastructure, and representatives from across the political spectrum argue we need new pipelines designed to last at least 50 years to transport dirty fuels the world has committed to moving away from in less time!

It doesn’t make sense to pin our future on a polluting, climate-altering sunset industry that already employs far fewer people than the clean energy sector. It’s why we must take the upcoming federal election seriously. Fortunately, every major party now has a climate plan. Unfortunately, not every plan will get us to our Paris Agreement targets—and even those targets seem inadequate in the face of escalating consequences.

A common refrain is that Canada produces a relatively small percentage of emissions, so it doesn’t matter what we do.

Although the only discussion now should be about solutions and how to implement them quickly, some people in and out of the political sphere still refuse to accept the massive amounts of evidence for human-caused global heating and the need to address it. A common refrain is that Canada produces a relatively small percentage of emissions, so it doesn’t matter what we do.

Most countries could use the same excuse, and it ignores that we don’t account for the emissions from burning the fossil fuels we sell globally. And while it’s true Canada produces less than two percent of global emissions, we have one of the highest per-capita rates, behind the US and Saudi Arabia, and we’re the 10th largest emitter overall. Countries like Canada that contribute two percent or less to emissions add up to close to half the emissions, which means we all have to do our part. The top 15 emitters, including Canada, generate about 72 percent.

China produces more than 27 percent (although far less per capita than Canada), the US produces just under 15 percent, and India, in third place, produces under seven percent. More than 90 percent of emissions have occurred in less than 100 years, with more than half in less than 30!

It’s taken us hardly any time to pollute air, land and water and alter the climate with our wasteful consumer and car culture. There’s no reason to continue down this road. It’s been proven many times that money, cars and excess stuff don’t bring happiness. In Canada, we could go a long way by being less wasteful, but that’s just a start.

There’s no shortage of solutions; we just need political will.

We’ve put off tackling the problem in a meaningful way, and people—especially youth—have had enough. There’s no shortage of solutions; we just need political will. It’s time for us all to demand that politicians stop thinking in short-term electoral cycles and start focusing on the future.

We should all examine the roster of candidates and parties where we live, compare their environmental platforms and records, and ask local contenders about their climate commitments. Remember, in Canada, we don’t vote for a prime minister; we vote for a member of Parliament to represent us.

Thanks to the tremendous efforts of so many—youth, Indigenous people, environmentalists, politicians, business leaders and innovators—the climate crisis has become Canada’s top election issue. We must ensure it stays top of mind, no matter which party or parties end up governing after October 21.