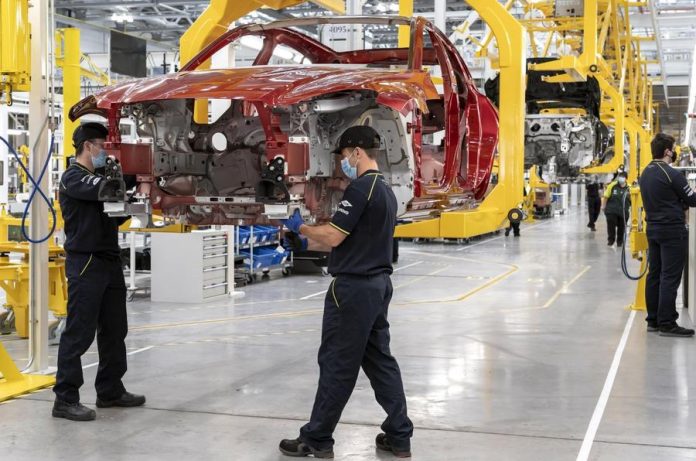 Punjab has been taking the lead in opening various sectors including textile export oriented units and different trade and business as compared to Sindh in a bid to ease locked down.

Perhaps the cases of corona virus in Punjab have never been more alarming than Sindh. Experts attribute it low testing in densely populated province otherwise corona patients would have crossed Sindh.

Irrespective of this belief, Punjab also took an edge in opening the auto sector first while Sindh adopted a go slow approach and gave green signal after Punjab to auto players in Karachi to start their operations. Some assemblers informed Pakistan Stock Exchange on May 19 regarding opening of units while others intimated starting units from May 20, 2,020.

Industries in Punjab might have rolled out some vehicles and completed their pending works while units in Sindh had only few days left to gear up production which would come to an end for Eid holidays starting from May 22 to 27, 2,020. As Eid falls either on May 24 or 25, assemblers may call upon workers and staffers for working two days on overtime ahead of Eid if they are serious in assembling vehicles. Otherwise, the real production activities will kick start after Eid.

Prior to this, authorized showrooms of car assemblers in Karachi were allowed to resume their businesses from May 11 but few days after their start, the owners of showrooms were not happy over lack of response from the consumers towards fresh booking of cars.

Even the advance booking situation on opening of units on May 19 also remained almost same. A showroom owner said he had been receiving just basic inquiries but consumers are more specific whether prices would come down or not in Budget FY21.

He said news are swirling in the markets regarding cut in general sales tax and import duties on parts and accessories to give a breathing space in future for the industrial sector which had faced one of the worst periods of no sales and production in April till second week of May, 2,020 especially in Karachi.

He said people have set their eyes on the Budget 2020-2021 regarding price cut in cars and this expectation might have slowed down fresh booking further from the consumers.

The dealer claimed that even banks are not receiving sizable number of applications for auto loans at the moment.

He recalls hustle and bustle at the showrooms in previous years ahead of Eid when buyers preferred to have new car at any cost either by booking the vehicles months ahead to get timely delivery before Eid or paying “heavy on or premium money” on spot buying at showrooms. However, COVID-19 has taken away these kinds of trading activities.

Neither online booking is attracting buyers nor are customers visiting dealerships in larger numbers after easing the locked down, a dealer said after few days when showrooms were opened on May 11, 2,020.

Only workshop activities are gaining momentum which is understandable after two months of locked down.

By observing standard operating procedures (SoPs), the dealerships are neither calling their full staff nor taking vehicles for repairs in large numbers, he said.

Only corona virus and locked down cannot be blamed for slowdown in sales. Car sales have remained under pressure from July 2019 on wards after soaring prices by the assemblers on rupee-dollar parity, high incidence of import duties and local taxes, high interest rates etc.

The dealer said cut in interest rate to eight per cent from over 13 per cent may lure customers but so far buyers had yet to show any extra interest.

The only solution to bring out car segment from corona led crisis and to boost demand is to bring down imports duties and taxes coupled with removal of federal excise duty ranging from 2.5 per cent to 7.5 per cent depending on engine power in upcoming budget. These benefits would at least generate new demand besides resulting in higher revenue collection on rising sales volumes.

The need of the hour for the assemblers is also to negotiate with their principals to lower the prices of completely knocked down kits to bring down domestic prices, he said.

One should appreciate car assemblers and showroom owners for keeping strength of staffers and workers intact amid massive production losses. Even salaries have not been cut.

Indus Motor Company (IMC) has approved a short term interest free emergency loan to improve vendors’ liquidity in the current locked down period. The emergency loan will be disbursed in May. However, other assemblers have not come out with such help for the vendors so far.

However, Pakistan Association of Automotive Parts and Accessories Manufacturers Association (PAAPAM) had run a campaign in print media recently regarding government’s industrial support package announced by the government for small and medium enterprises (SME) sector in response to COVID-19.

PAAPAM said sadly, SME auto parts manufacturers or its workers cannot tap into the above packages as the banks are adamant and the utility companies are non-committed.
The Association had already warned off massive lay off of workers and inability of vendors to pay the salaries as well as cut in salaries.

However, at IMC showrooms, people, who had booked Toyota Yaris on line or through advance booking at showrooms prior to locked down, are trying to get details of their delivery.

Those customers, who are booking vehicles right now, are getting delivery time of August, a dealer said.

By doing a good job for not showing exit doors to the employees during closure and no pay cut, Indus Motor Company (IMC) took the lead in giving a jerk to its customers by raising prices by Rs 110,000-500,000 amid no sales and production in April.

A new player – Hyndai Nishat – also raised prices of Porter H-100 models by Rs 50,000, citing weakening of Pak Rupee against international currencies especially US Dollar.
Many vendors are unhappy over the increase in car prices by the manufacturers when everything was shut down and no sales were recorded, terming it unjustified move on which the government or Competition Commission of Pakistan should take notice.

Assemblers made a clever move to raise prices ahead of Budget FY21 as any duty and tax cut in new budget would force assemblers to bring down prices.
Before officially opening their factories as per provincial governments order, sources in the markets said that some assemblers had already started their factories and were operating their units and shipping vehicles from production plant to other parts of the country.

A heavy vehicle assembler had been rolling out vehicles since April 24 and the staffers and workers had been marking their attendance regularly.
There are also reports that a Korean automobile manufacturer had been working in nights during locked down and kept the plants closed in daylight. Sources said that the company had actually been transferring its vehicles’ stocks to different parts of the country.

A Japanese assembler expressed surprise that assemblers in same vicinity were closed but the Korean assembler had been working without any fear, which was unjustified.
Another Chinese vehicle assembler was also working normally in the locked down.
The provincial government had not bothered to check whether the car units were following standard operating procedures or not.

However, the real picture of production and sales will arrive in May figures but dealers and assemblers said that May will end on a depressing note due to Eid holidays and late permission to open industries.

The July-June 2019-2020 will end with marked decline in car sales as July-April sales had already posted over 50 per cent drop.

Electric Cars – Do they have a future in Pakistan?