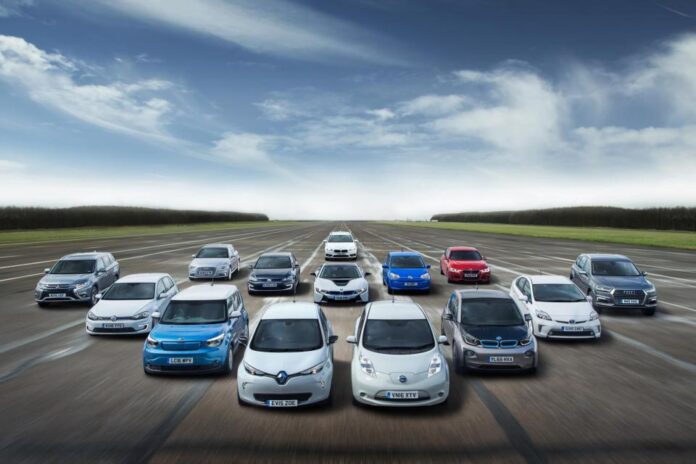 According to reports Government is taking initiatives towards supporting EV industry in Pakistan, A comprehensive EV policy is expected in the upcoming budget of June 2021-22. Sources confirm that all related policies are being taken into consideration keeping in view futuristic approach which will not only address environmental concerns but industry growth as well.

A positive sign is that the renowned International EV assemblers are already in discussions with local Business Entities for setting up local operations & assembly lines.
Hope government introduces polices which not only secures investments in the area but also offers comprehensive incentives for a certain limit of time. Related authorizations for infrastructure setup have always been a tuff which would requires core focus of policy makers.

Potential area of related development will be
1- Charging Stations
2- Vendor’s Developments
3- Assembling Plants
Once said happens vacuum of private & commercial EV can be addressed for local & international markets as already has been observed in other developed countries.
It has been observed that our neighboring countries relevant Industry revenue has surged immensely, said wasn’t possible without a positive futuristic business vision / policies of governments.

• Several countries made huge steps towards a cleaner future in 2020, with the electric vehicle market growing across the globe.
• China boasts the largest EV market, while Norway has the highest share of electric cars in total passenger car sales.
• In Europe, several EV markets saw triple digit growth in 2020 electric vehicle sales.
• Although the U.S. has the third-largest EV market, growth only reached 4% last year.

With Tesla’s meteoric stock market rise in 2020 and several countries and car manufacturers announcing new electric vehicle targets, electric cars have been in the spotlight for a while now. And while they still account for a single-digit percentage of global passenger car sales, several countries, especially across Europe, have made huge strides towards a cleaner future in 2020.
While Norway is by far the country with the highest share of electric cars in total passenger car sales, no country comes even close to China in terms of absolute market size. According to the China Association of Automobile Manufacturers (CAAM), sales of battery electric vehicles (BEV) and plug-in hybrids (PHEV) amounted to 1.00 and 0.25 million in 2020, respectively. That puts China way ahead of Germany (395,000), which overtook the United States in terms of EV sales.

• Electric car sales continued to grow in 2020 and global electric car stock passed the 10 million milestones.
• Europe became the world’s largest EV market for the first time.
• China still had the largest number of electric cars on its roads with a total of 4.5 million.

However, the world is still at the beginning of its transition to clean energy.

Media Reports of June 2020
Despite 2020 being a sluggish year for the global automobile industry, electric car sales continued to grow. According to the latest edition of the International Energy Agency’s Global EV Outlook, electric passenger car sales climbed despite the total automobile industry contracting by 16 percent. While Europe overtook China to become the world’s largest EV market for the first time last year, China still had the largest number of electric cars on its roads last year with a total stock of 4.5 million.
The Global EV Outlook is an annual publication that identifies and discusses recent developments in electric mobility across the globe. It is developed with the support of the members of the Electric Vehicles Initiative (EVI). Combining historical analysis with projections to 2030, the report examines key areas of interest such as electric vehicle and charging infrastructure deployment, ownership cost, energy use, carbon dioxide emissions and battery material demand.
The case studies on transit bus electrification in Kolkata (India), Shenzhen (China), Santiago (Chile) and Helsinki (Finland). The report includes policy recommendations that incorporate learning from frontrunner markets to inform policy makers and stakeholders that consider policy frameworks and market systems for electric vehicle adoption.

Further extends the life cycle analysis conducted in Global EV Outlook 2019, assessing the technologies and policies that will be needed to ensure that EV battery end-of-life treatment contributes to the fullest extent to sustainability and CO2 emissions reductions objectives. Finally, it analyses how off-peak electricity demand charging, dynamic controlled charging (V1G) and vehicle-to-grid (V2G) could mitigate the impact of EVs on peak demand, facilitate the integration of variable renewables and reduce electricity generation capacity needs.

Sales of passenger cars were slow in 2019 but electric cars had another bumper year.

Sales of electric cars topped 2.1 million globally in 2019, surpassing 2018 – already a record year – to boost the stock to 7.2 million electric cars. Electric cars, which accounted for 2.6% of global car sales and about 1% of global car stock in 2019, registered a 40% year-on-year increase. As technological progress in the electrification of two/three-wheelers, buses, and trucks advances and the market for them grows, electric vehicles are expanding significantly. Ambitious policy announcements have been critical in stimulating the electric-vehicle rollout in major vehicle markets in recent years. In 2019, indications of a continuing shift from direct subsidies to policy approaches that rely more on regulatory and other structural measures – including zero-emission vehicles mandates and fuel economy standards – have set clear, long-term signals to the auto industry and consumers that support the transition in an economically sustainable manner for governments.

The India Electric Vehicle Market has been impacted by the outbreak of COVID-19 pandemic due to supply chain disruptions and halt of manufacturing units due to continuous lockdowns and travel restrictions across the county. However, as electric vehicle (EV) market is still in its nascent stage in India. It is expected to grow at a much faster rate during the forecast period due to various government initiatives and policies.
E-Commerce companies (Amazon, for example) are launching initiatives to use e-Mobility for last-mile deliveries to reduce carbon footprint. India is experimenting with e-Mobility for public transport and has deployed electric inter-city buses across some of the major cities. In addition, state governments are also playing active role in deployment of policies encouraging EV. For instance,

The EV market in India has gained significant momentum after the implementation of FAME India scheme with its aim of shifting towards e-mobility in wake of growing international policy commitments and environmental challenges. Moreover, India offers the world’s largest untapped market, especially in the Electric two-wheeler segment and as 100 percent foreign direct investment is allowed in this sector under the automatic route market is expected to gain momentum during forecast period.

SCOPE
An Electric vehicle is one that operates on an electric motor, instead of an internal-combustion engine which generates power by burning a mix of fuel and gases. Therefore, Electric vehicle is seen as a possible replacement for the current-generation automobile in near future to address environmental challenges. The report covers the latest trends and technologies followed by COVID-19 impact on the market.

Growth of Electric Buses
India is the second most populated country in the world after China, and just like China, which has the largest electric bus fleet in the world, India is also pushing hard for the electrification of buses. Many state governments have already started the procurement of electric buses from Chinese and local electric bus manufacturers.
With growing need for controlling GHG (Greenhouse gases) emissions emitted by vehicles, the government is encouraging the use of electric powered vehicles across various states, which is boosting the demand for electric buses in India. The market is being driven by factors such as increase in domestic manufacturing, rapid urbanization, and rise in environmental awareness.

Electric Two Wheeler Vehicles Growth
With transportation still being a challenge in India, a lot of people in these segments look forwards to the 2-Wheeler Industry in India. As a result of the surging pollution, the national government has launched stringent policies to curb vehicular emissions. In particular, the jump from Bharat Stage V (BSV) to BSVI emission standards is expected to benefit the Indian electric scooter and motorcycle market, by raising the prices of petrol-driven two-wheelers by 7¬–15%. From 1st April 2020 onward, automakers are only allowed to sell BSVI-compliant vehicles in the nation, which is driving the push toward electric variants.

For extracting the maximum revenue from the rapidly growing Indian electric scooter and motorcycle market, original equipment manufacturers (OEMs) are expanding their facilities. For instance,

• In January 2020, Ather Energy Pvt. Ltd. announced intentions to build a 400,000-square-foot factory in Hosur, Tamil Nadu, which would have an annual output of 1 lakh units. Currently, the company operates one manufacturing plant in Bengaluru, which has a capacity of 25,000 units. The idea of the company behind an additional facility is meeting the rising demand for electric two-wheelers in India.
• In the same vein, Okinawa AutoTech Pvt. Ltd. invested 28.4 million (INR 2 Billion) for its second manufacturing plant in May 2019. To be developed for electric two-wheeler vehicles in Rajasthan and planned to be commissioned in early 2020–21, the manufacturing plant will have an annual output of 10 lakh units.

Furthermore, the availability of a considerable number of electric two wheeler models, their low cost, as well as their availability as a substitute for conventional fuel-based vehicles and these are fueling the demand in the India Electric vehicle market.

Competitive Analysis
The India EV market is consolidated due to presence of major players active in the market owing to cheap and readily available manpower. However, established players in the market are introducing their new model’s, product launches to gain competitive edge over other players. For instance,
• In January 2020, Morris Garages Motor India launched the d ZS EV, which is the first electric internet SUV in India, the car has a driving range of 340 km on a full charge. The ZS EV vehicle has been awarded five stars at the Euro NCAP crash tests.
• In 2019, Tata Motors announced its electric vehicle technology ZIPTRON, which will power all future Tata electric cars. This technology consists of a highly efficient permanent magnet AC motor, providing excellent performance on demand. It will also offer a dust and waterproof battery system meeting IP67 standards.

The startups are expanding their presence by raising funds from investors, tapping in new and unexplored cities. Companies are investing a tremendous amount on R&D and launching new models to mark their presence in the market.

Ongoing Developments
• In January 2020, the Department of Heavy Industries (DHI) of India, approved 2,636 electric vehicle charging stations in 62 cities across 24 Indian states and union territories (UTs) under the second phase of the FAME program to promote e-mobility.

DEAR READERS THE ABOVE IMFORMATION IS GATHERED FROM DIFFERENT MEDIA SOURCES & HENCE ANY CONTRADICTION IN RELATED FIGURES OR REPORT IS REGRETTED IN ADVANCE.

Exclusive written by Aqeel Bashir for Automark Magazine, this article has been published in printed edition of Automark in June-2021