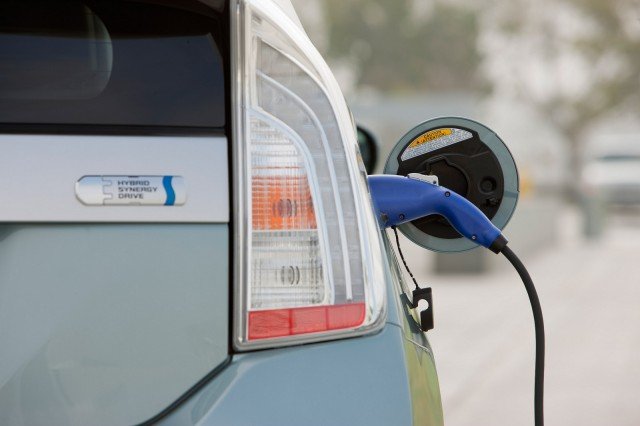 Cars with plugs have been on sale since December 2010, and a second generation will start arriving next year.

But while long-range battery-electric cars–the 2017 Chevrolet Bolt EV and an all-new 2017 Nissan Leaf–grab attention, another vehicle on the way could be equally important.

That’s the second generation of the Toyota Prius Plug-in Hybrid.

In general, journalists dislike anonymously sourced stories. They don’t let readers evaluate the source, and they offer less accountability if the information proves to be incorrect.

Green Car Reports publishes such stories only with great care–but this is one of the times we’re willing to do so.

Within the last month, we heard from an industry source that the next Toyota Prius Plug-In Hybrid will have “30 to 35 miles” of rated battery range.

If that’s true, it will change the game significantly.

Our source is an executive in the auto industry who’s deeply familiar with the current and future universe of battery-electric and plug-in hybrid vehicles.

We trust that source, and are satisfied with the source’s explanation of how the Toyota information was obtained.

The all-new, fourth-generation Toyota Prius hybrid is expected to launch within the next few months, as a 2016 model.

Toyota itself has said that the plug-in hybrid version of the next Prius will lag the conventional hybrid model by roughly a year.

But while that car garnered sales of more than 40,000 units over four years, it was hardly beloved by plug-in car advocates.

The plug-in Prius had just 11 miles of all-electric range, and its battery and motor were marginal enough that it couldn’t complete those 11 miles on the relatively gentle EPA test cycle without switching on its engine after 6 miles.

Its 11-mile range, in fact, was the lowest of any car with a plug sold in North America.

Despite that distinction, the plug-in Prius was awarded single-occupant carpool-lane access in California. Still, Toyota heard the grumbling.

“We have been listening very carefully to Prius [plug-in] owners over the past two years,” said Satoshi Ogiso, Toyota’s chief engineer and the man in charge of developing the next range of Prius models, to reporters in August 2013.

“[We] are considering their request for additional all-electric range,” he concluded.

And if the next Prius Plug-In gets that 30-to-35-mile range rating, it will go from the lowest electric range of any car with a plug to the second-highest range of any plug-in hybrid known today.

Its range will exceed those of the Ford C-Max and Fusion Energis, the Hyundai Sonata Hybrid and future Kia Optima

Hybrid, and the now-withdrawn Honda Accord Hybrid.

It’ll also surely exceed the rated ranges of luxury plug-in hybrid SUVs coming this year from BMW, Mercedes-Benz, and Volvo, with Audi and Mitsubishi piling in next year as well.

And it’ll get significantly closer to the all-new 2016 Chevrolet Volt, which GM says will receive a range rating of at least 50 miles.

It remains to be seen whether Toyota aims to sell as many Prius plug-ins it can, or simply offer the car to get specific credits under California’s zero-emission vehicle mandate.

But the all-new Prius is expected to be better-looking, and sportier, and offer improved driving dynamics, while retaining the Toyota reputation for high quality and reliability.

Add to that an EPA fuel-economy rating of 50 mpg or more, plus 30 miles or more of electric range, and you’ve got what sounds like a very competitive new entry in the plug-in car world.

Atlas Honda has once again increased the price of its bike...