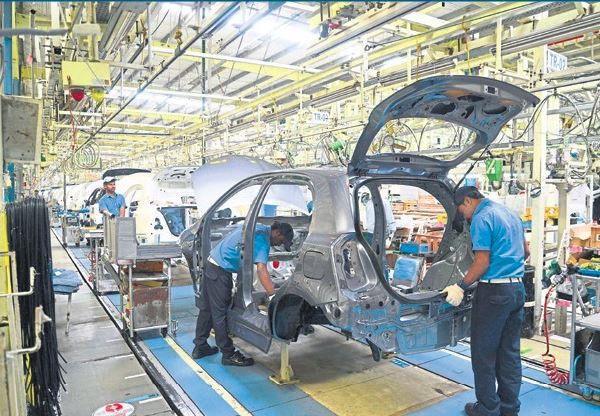 A major policy initiative by the PML-N government to announce new Auto Development Policy 2016-2021 will materialize under the tenure of new Prime Minister Imran Khan of Pakistan Tehrik-e-Insaaf.

Auto consumers are anxious to see a galore of models from new entrants like Hyundai, KIA, Renault, Nissan, United etc vehicles. Not only new jobs will open but the economy will also strengthen.

Ghandhara Nissan and Daehan Dewan fall in Brownfield category while as per market reports two companies – Cavalier Automotive and Habib Rafiq have also applied for green field status and waiting for approval.
It means that Pakistan has succeeded in bringing in over one billion dollar investment in the auto sector alone through new entrants.
One of the key players aiming to cash their luck in Pakistan is KIA Lucky Motors which aims to produce 25,000-30,000 cars, SUVs, MPVs and LCVs per year at Bin Qasim Industrial Park.

United Motors already had introduced 800cc car and soon roll out local assemble cars at its Lahore plant with the annual capacity 35,000 units per annum, while Khalid Mushtaq, having annual plant capacity of 1,200 vehicles per annum, will make vehicles at Nooriabad Industrial area.

So far everything looks good but one thing must be causing some anxiety among new entrants and that is unstable exchange rate and government’s future policy on used car imports. These two things pose a serious threat to the new players.
It is premature to predict a stable or a difficult future of new players but one thing is clear that Chinese cars especially may take a lot of time to create a niche in Japanese dominated market. It is observed that people do not have trust on reliability and quality of Chinese cars mainly.

KIA and Hyundai have already tested their luck which later proved a bad luck for Korean auto giant as its local partner became defaulter resulting in closure of local production. It will be interesting to see how Kia and Hyundai will manage to strengthen its position in their second chance. Kia and Hyundai vehicles in the last few years in other countries have emerged as strong challenger to Japanese and European rivals but Pakistan is totally an uncertain market.

Nissan has also tested its Sunny but it did not succeed due to multiple reasons. Now Nissan with its local partner will again test their luck through Datsun models. Lets see how Datsun will be able to compete with imported 660cc vehicles and upcoming locally made Alto 660cc. The road ahead is quite bumpy for Nissan.

Some existing Japanese players are excited keeping in view of their future plans. Pak Suzuki is coming out with Alto 660cc car second quarter of next year, replacing iconic Mehran VXR. Pak Suzuki has already decided to stop production of VX and VXR models, thanks to Pak Suzuki.

As per market reports the Indus Motor Company (IMC) is planning to launch Vios in December 2018 by replacing XLI and GLI models. IMC may launch four to five models of Vios with 1,300-1,500cc both automatic and manual transmissions.
Ghandhara Industries had launched imported D-Max SUV model but later it will be produced locally.

New entrants will avail the benefits of low rates of duties for importing their parts as completely knocked kits (CKD) for three years.

The new players may give tough competition to the existing Japanese assemblers. Barring Honda Cars Limited (HACL), Pak Suzuki Motor Company Limited (PSMCL) has been notorious in maintaining its outdated and obsolete technology for 30 years especially in the case of Suzuki Mehran, Ravi and Bolan.

The competition between new and existing players is set to become tougher than ever and consumers will have choices to purchase cars as per their desire. However, it is feared that a new cartel will emerge to join hands with the existing cartel of Japanese assemblers leaving the consumers helpless again who may witness three to four times price hike in a year on excuse of rupee-dollar parity.

However, one bad news appears in the local media regarding shelving of plan of Honda Brio by Honda Atlas Cars Pakistan (HACP) recently due to volatile exchange rates making the cost of vehicle unfeasible.
The management HACP has deferred the introduction of a new locally-assembled car owing to the country’s uncertain economic condition.
The company had already given the drawings of dies, tools and moulds to local vendors some six months back.
HACP has now asked local vendors to cancel their activities for parts development, vendors for Honda cars said adding the company has also asked the vendors to give back the drawings.
The car assembler became skeptical when the rupee lost the value by five per cent few months back. Now the currency situation is highly volatile, making the cost of vehicle unfeasible.
HACP was considering introducing locally assembled 1,200cc Brio by 2019 which could add more than 3,000 units in company’s total production.

The reason given by the company to suspend local assembly is hard to stomach when other existing and new assemblers are already taking a high risk to come out with new models despite the fact that their stakes are definitely in other auto businesses like two wheelers and are certainly not well organized in big vehicle segments.

It is time that Pakistan should move forward and for this purpose the Ministry of Science and Technology has already alarmed the local assemblers to gear up for future challenges.
As per Science Ministry, technology requirement is globally raised by an automaker (OEMs) to meet a market need or enhance competitiveness. The R&D must be carried out with the firm or in a university or by an auto part maker (APM), in conjunction with the OEM.

In Pakistan there is no local auto maker, the R&D is carried out back home by the foreign partner and the local OEM and the APMs all make to print, having been provided the design, drawing, technical data and standards. Additionally technical support through technical man power, training and visits is provided. However design parameters and testing details and procedures are not provided, so technology is not wholly transferred.
Technology Foresight 2017-2025 in this environment is challenging, especially when the automotive industry is in transition facing challenges daily of revolutionary technologies shaping and de-shaping.

The Ministry said Pakistan’s automotive industry had its beginning soon after the birth of the country. It did not inherit anything in the automotive field and little else in other industrial sectors too.

General Motors started assembly of Bedford trucks in 1949 from semi knocked down kits. They later became Ghandhara Motor and introduced CBU Vauxhall cars, whilst indigenization of Bedford trucks continued steadily. Even an engine assembly plant for the truck called Bela engineers, was set up as separate company in the beginning of 70’s.

In the 60’s American Motors Jeep began to be progressively manufactured, but car manufacturing came into its own only when Suzuki tied up with Pakistan Automobile Corporation (PACO) and in early 80’s the first Suzuki FX was rolled out, followed later by Toyota and Honda in early 90’s. Nissan came in the same decade but played a very short innings. Chevorlet came and went at about the same time, with its Daewoo’s small car, Matiz, Hyundai LCVs came later, as well as their Santro Car. The LCV became very popular but due to dispute within the sponsoring family could not sustain. KIA also came and went as a shooting star because the local sponsors ran into problems with the government.
Pakistan has had many false starts in indigenous manufacturing of vehicles. In late 70’s Pakistan produced the first indigenous 4×4 vehicles called Nishan based on American Motors Jeep being manufactured by Naya Daur Motors. This was led by the armed forces at the behest of the head of government. The project had a very short life. In 80’s the first local LCV called proficient based on Suzuki Pick up, was launched, in the 90’s the first local truck Yasoob came and later in the first decade of the century a local car REVO was introduced as well as Zabardast truck and Zabardast 4×4. The LCV and the car plus the Zabardast brand of Vehicles, died because of paucity of working capital whilst the truck was killed by the armed forces, who had helped give it birth.

Pakistan is ranked 33rd by volume amongst the auto manufacturing countries. It produces all kinds of vehicles under collaboration but currently has no local manufacturer of any indigenous 4-wheeler.

In 2007, the government launched the Auto Industry Development Programme (AIDP) – as policy interventions to encourage Original Equipment Manufacturers (OEMs) / vendors / new investors to make medium to long term decisions to develop critical components and acquire technology transfer. AIDP aimed to facilitate the auto industry a safe transition from deletion programmes, not allowed under TRIMS to the Tariff-based system environment and also assist in planned expansion of the capacity of OEMs and Vendors, achieve competitiveness, encourage technology enhancement, and achieve further localization and possible integration with the global value chain.

However, AIDP did not yield desired results due to lack of implementation in letter and spirit. Some of the salient reasons were; lack of government funds to meet the programme parameters, as Technology Assistance Funds, HR development funds, machinery funding were not provided.

As many as 49 fiscal interventions were made during the period inducing uncertainty conditions laid down for new investors in new investor’s policy were not attractive.
Even the suggested tariff rates in the plan were not implemented on one pretext or another.

The Economic Coordination Committee of Cabinet constituted a committee entrusted to formulate Automotive Development Policy. As a result of deliberations of committee members from academia, industry, government representatives and community / consumer, the Automotive Development Policy (2016-21) was formulated in 2016 which envisaged development plans for the automobile Industry in Pakistan to facilitate higher volumes, attract investment, ensure a level playing field for competition and offer higher quality in-line with emerging opportunities within the country and in the region.

The policy as finalized by the PML-N government approved and notified, was discriminatory against the existing OEMs in the country and did not offer anything to APMs. The provision of Funds for Technology Assistance and HR development were also withdrawn. The enunciated objective of the policy is to create a balance between industrial growth and tariffs to ensure sustainability for all stakeholders whilst attaching prime importance to consumer welfare. The policy provides consistency and predictability for new investors with a mid-term policy review mechanism to cater to emerging developments to increase production of automotives by the year 2021. The main Goals of the policy are;
Automotive industry contributes 2.8 per cent of GDP; the industry is contributing over Rs 120 billion to national exchequer; over 2.4 million Pakistanis are employed because of auto and allied industries, supporting minimally 12 million people.

It is the count of road motor vehicles per 1000 inhabitants. Motorization Index of Pakistan and has been calculated using statistics of Passenger cars, Jeeps, station wagons, and tax-cabs as given in Pakistan’s Statistical Year Book 2015 excluding two and three wheelers. It shows an increasing trend.

Pakistan has 15.6 vehicles/1,000 persons, India 18, Philippines 30, Indonesia 69, Thailand 206, and Malaysia 361. Thus the potential for growth and ameliorating the economy is very large. This is called the Motorization Index.

Due to lower per capita, only 16 out of 1,000 people in Pakistan currently own a vehicle, which is significantly lower than other regional countries. It is obvious that the potential for growth is huge which will substantially ameliorate the economy of the country.

by Owais Khan for Automark Magazine