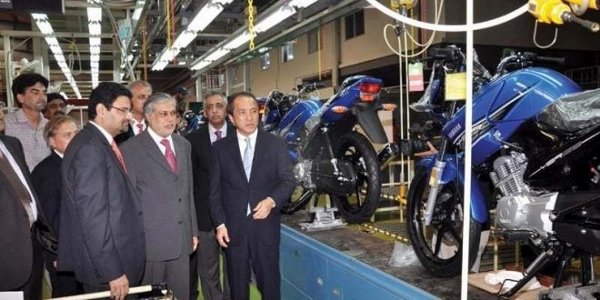 After a gap of seven to eight years – a new game has started all over Pakistan in which customers are being asked to deposit Rs 25,500 only for 70cc Chinese bike of any brand. The buyers are assured by the selling companies that they will get the delivery of bike after one month.

It is hard to digest that how the companies are trying to sustain in the stiff competition and how they are ensuring delivery of bikes at Rs 25,500 to the buyers.

Market sources said these bike sellers are procuring two wheelers from the markets on original rates and they are handing over the bikes to the customers at discounted rates which do not click the mind of old market players.

He said some of the units were closed due to default in repayment of bank loans. It is usual practice in Pakistan automobile industry to generate funds through advance booking of the vehicles.

Sources said as per media reports, everybody is aware of Rs 800 million fraud by two sons of Abdul Qadir Tawakkal Group/Naya Daur Motors under the name of Kia pride car. About 16,000 people lost their hard earner savings in this scam of 1994 by Naya daur motors.

The accused were involved in Kia Pride car scam along with their father in which more than 16,000 poor people were deprived of their hard earned cash through advance booking of the vehicle all over the country. After collecting more than Rs 800 million the accused failed to provide cars to their customers and fled to the US.

Sabir said has the government framed any rules for the new entrants under new Auto Policy which can safeguard the money of common men of the country.

They are offering cheap vehicles in the market to lure customers. They are unknown and do not have any financial worth in the markets. After taking heavy money from the customers there is no guarantee from them to ensure early deliveries of bikes or they may run away by collecting huge amount of customers.

Sabir said the government should allow new entrants to book vehicles in the range of 400-500 units and the State Bank should keep an eye on new entrants.

He said the State Bank should come out with a policy under which only selected number of vehicles are booked and released to the customers rather than taking heavy booking or failing to deliver vehicles on time.

Sabir said the government should also ask the assemblers not to work on only single model of bike or car and they should diversify their efforts by introducing new vehicles in Pakistan. Sources said the above practice of luring bike lovers is a kind of indirect sales in which dealers are lifting bikes directly from assemblers based in Sindh.

They said an investigation is going on against an assembler who was alleged of providing bikes directly to these kinds of dealers. Besides this mode of bike sales, a regular scheme of selling bike on “monthly installment” has gained pace in the last few years which is certainly an attractive option for many people who cannot afford to buy even cheap Chinese bikes on full cash payment. A large number of population still relies on private public transport since the government especially the Sindh has so far not come out with any urban or rural transport scheme. The top government officials of Sindh government are only paying lip service for providing effective transport system.

The major beneficiaries of this normal bike installment scheme are also young boys working in courier companies and food chains who use two wheelers to hand over parcel to the consumers.

The dealers take Rs 25,000 for 70cc bike as an advance payment leaving an open option for the consumers to pay monthly installments of two to four years. The total cost of bike swells to Rs 60,000 on installment. Consumers usually take the bike on installment and after using it for at least two years purchase another bike on same facility.

The buyer gets the photo copy of bike book and documents after purchasing the bike while the sellers (dealers) hold the original documents. People have literally gone wild for two wheelers in the last one to two years since the law and order situation has improved coupled with better farm income from some cash crops. Pakistan has seen good sugarcane and wheat crops followed by rice.

Rural population and growers of various crops prefer Honda bikes due to its quality and durability as well as good after sales and service. The construction activities and other projects under China Pakistan Economic Corridor (CPEC) especially in up country has generated extra demand for bikes. Surprisingly the costly Honda bikes have surpassed its cheap Chinese bike makers in terms of sales by continuously breaking its monthly sales records.

Honda motorcycles broke its monthly sales and production record by achieving production of 90,800 and 93,060 units, respectively, in May 2017. Surprisingly, the second highest bike maker, United Auto Motorcycle, has also broken its production and sales record in May 2017 by assembling and selling 31,347 units each.

Despite rising bike sales, the import of CKD/SKD kits for bike assembling fell to $73 million from $82 million in July-April 2015-16. It gives an impression that either the bike assemblers have achieved higher localization and they do not need imported parts or there is something wrong going on.

The two/three wheeler sector offers most preferred and economical means of transport and best alternative in the absence of public transport and thus holds considerable opportunity of growth. The figures of two/three wheelers essentially represent the organized sector and leading producers and shall be higher as there are 2/3 wheeler assemblers outside PAMA, Economic Survey 2016-2017 stated.

MVM and Yutong Strike A Partnership To Manufacture Electric Buses In...