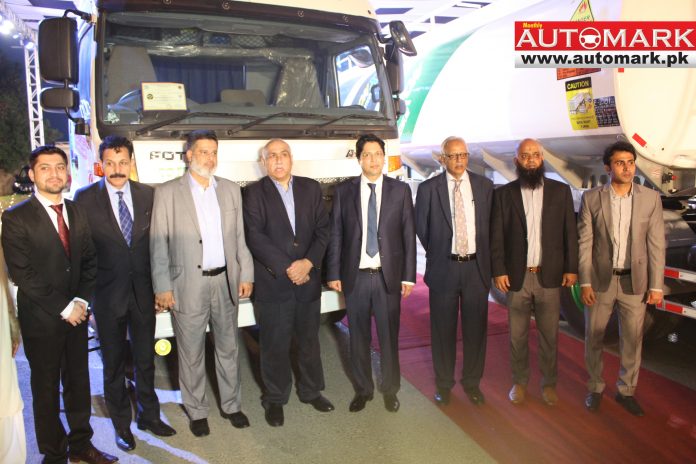 Karachi, August 01: “Master Motor Corporation Ltd. (MMCL) in pursuit of its commitment to safe transportation of petroleum products has developed vehicles in compliance with standards set by Oil and Gas Regulatory Authority (OGRA).” Managing Director of MMCL Nadeem Malik said this at an event recently held in Karachi.

While handing over the keys of a fleet of more than 40 vehicles to contractors of Pakistan State Oil (PSO), he commended the efforts of PSO and OGRA for their efforts to ensure the safety of transporters, transportation vehicles and the common commuter.

He said that Master Motor strictly follows the standards and regulations set by OGRA and addition of our trucks to PSO fleet is a proof of our commitment. “MMCL has a vision to serve the transport industry of Pakistan with the highest quality products and after sales services. We are the first company to offer complete range of products to facilitate the complete commercial vehicle segment,” he added. MMCL’s growth in the past fiscal year was the highest in the automotive industry with a year on year growth rate of 63 percent. “This significant increase in production and sales is a sign of customers’ trust in quality of our products and after sales services network which is one of the largest such networks in the country catering to more than 10,000 master vehicles already plying on road,” said Nadeem.

“PSO as nation’s largest energy company has been striving to help national economy by building and enhancing a wide-spread retail network with the support of a well-established storage and supply infrastructure,” said Managing Director PSO, Sheikh Imran ul Haq.

“Addition of vehicles manufactured by Master Motors as per the OGRA guidelines to our fleet of over 8000 vehicles will boost the performance and safety of our POL transportation network,” he added.

It is worth mentioning here that MMCL is also an authorized assembler and dealer of world’s renowned brands like Mitsubishi Fuso, Foton Daimler, IVECO.