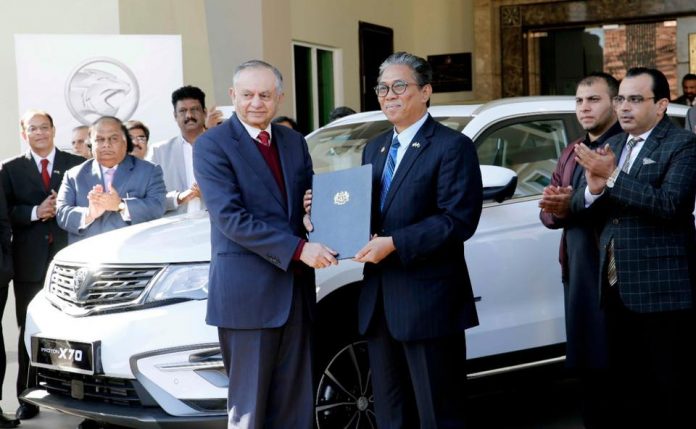 As promised, Malaysian Prime Minister Mahathir Mohamad gifted Imran Khan a SUV car as a gesture of goodwill and to initiate producing the Malaysian brand car here in Pakistan. The car is none other than Made in Malaysia, Proton X70 SUV.

It recently arrived in Pakistan, as a special gift handing ceremony was held in Islamabad on 16th December 2019. Advisor to PM, Mr. Razzak Dawood was the guest of honour, who received the SUV by Malaysian High Commissioner Mr. Ikram, on behalf of PM Imran Khan.

Mr. Hilal Afridi from Al-Haj Automotive was present,  Mr. Muahmmad Zahid who is the Chairman of Board of Investment and other government officials ; along with Al-Haj team members attended this event.

This Proton plant will be the first-ever CKD plant in Pakistan, the plan officially began back in 22nd of May 2019 when the Malaysian Prime Minister and Pakistani Prime Minister, Imran Khan signed a ceremonial marble plaque at an event held in Islamabad, Pakistan.

The plans began back in the year 2017 when the Proton developers disclosed their plans to achieve the target of selling 400,000 units by 2027. The major part of their plan was to establish CKD plants in overseas markets. For making their way in Pakistan they choose Al-Haj Automotive and the agreement between both companies was signed on 29 August 2018. To take benefit of the subsidized duties offered to CKD vehicles a plan came in the form to establish an assembly plant in Pakistan.

Al-Haj Automotive group has the resources and the experience to give growth to Proton in Pakistan. The new CKD plant which will be built on Greenfield assembly has an initial investment of USD30 million. The assembly plant will create 2,000 direct employment opportunities in the first three initial years of commencement and 20,000 indirect jobs as the plant commissions.

Toyota Vios to be launched in Pakistan by 2018