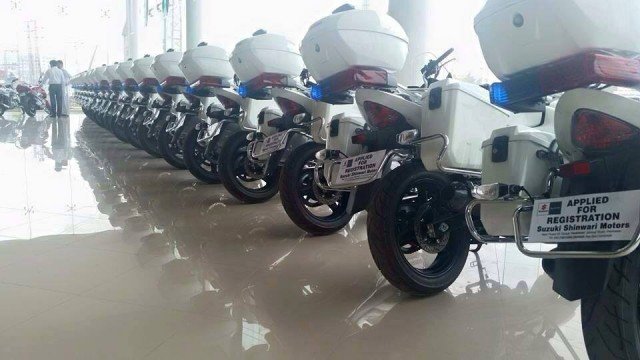 Pak Suzuki is planting new seeds into the soil of Pakistan by locally assembling their already existing Suzuki Inazuma. Launching ceremony of the locally assembled Suzuki Inazuma 250cc was held last night at Serena hotel, Islamabad. The bike was previously manufactured and assembled in Japan only but seems like Suzuki found out a feasible way of locally assembling it.
Suzuki Inazuma is a four stroke, liquid cooled 248cc engine motorbike with a fuel capacity of 13.3 liters. With coil springs fitted both at the rear and front, the bike is quite comfortable and smooth at bumps and jumps.
Surely no change in the specifications will be done but the quality will be questionable as local manufactured products lack the quality, the case applies to all the automakers operating in Pakistan. In regards to the price it is expected to be lower than the already attached price tag of PKR 725,000.
Pak Suzuki aims to get huge orders from security institutions of the country as they have been playing an active part in attaining discipline for the state and the need is felt by the automaker. If you notice bike fever has increased considerably over the couple of years and KPK traffic police was nowhere behind. The KPK police recently gave handful of brand new Suzuki Inazuma to their police. Although Suzuki Inazuma stands lowest in the power league bikes but still has enough power to eat many 125cc and 200cc.

Why the Auto Industry is suffering and the way forward in...