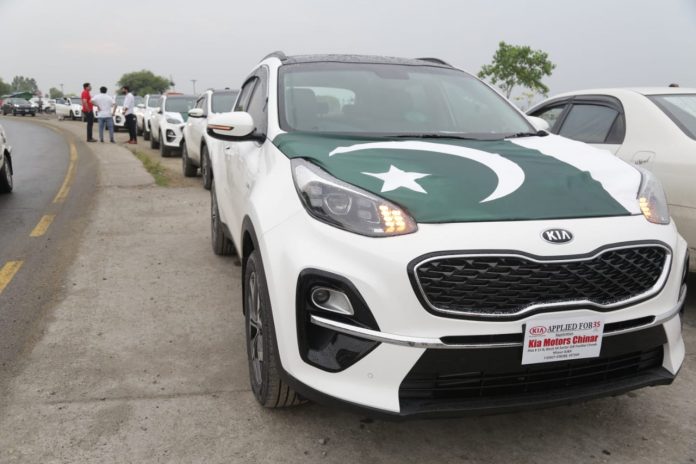 On Sunday, 9th August, Kia Motors-Chinar organised “Kia Sportage Takmeel-e-Pakistan” rally in which KIA Sportage SUV users from all over the Pakistan participated. This was done in order to celebrate the spirit of celebrating of Pakistan on 14th August as Independence Day is approaching. Later on appreciations certificates were distributed among the participants by Director General Mirpur Development Authority Mr. Ejaz Raza.
Almost 25 Sportage SUV’s owners participated from Punjab region and drive the vehicle about 5 Km in a rally in Mir Pur Azad Kashmir. It was first of its kind of rally for any specific brand at Mirpur Azad Kashmir says owner of KIA China Motors talking with Automark.

It was a joy filled event overall for everyone not only for participants. It were a powerful show of Kia Sportage SUV’s in Pakistan hosted by Kia Motors Chinar owner Fateh Mahmood Kiani and organised by Diehard fan of Kia Sportage Shahid Malik sahib while main stream media was missed this event as usual.

Locally Assembled Prince Pearl to be unveiled on 31st January 2020