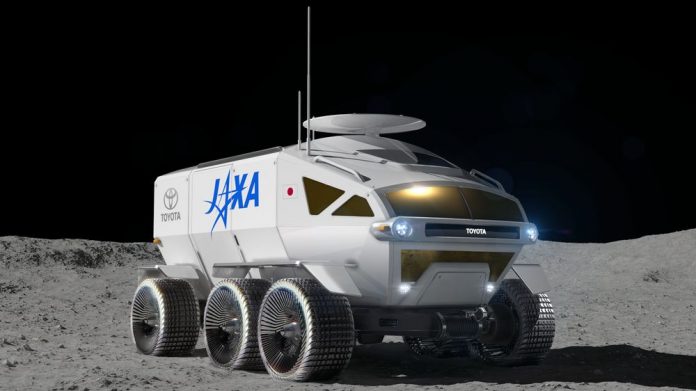 It’ll carry a pair of astronauts more than 6,200 miles

Toyota’s next challenge is out of this world.
The carmaker is working with the Japanese Aerospace Exploration Agency to build a pressurized rover for exploring the moon.

The six-wheeled, self-driving vehicle will be able to carry a pair of lunar explorers up to 10,000 km (more than 6,200 miles) and is about the size of two microbuses, JAXA wrote in a release Tuesday.

The passengers will be able to take off their spacesuits in the 13 square meters of living space, and take two more people on board in an emergency. It’s powered by the Japanese car company’s fuel-cell tech (which uses solar energy).

“Having Toyota join us in the challenge of international space exploration greatly strengthens our confidence,” Hiroshi Yamakawa, JAXA’s president, said in the release. “Manned rovers with pressurized cabins are an element that will play an important role in full-fledged exploration and use of the lunar surface.”

2019’s already seen a big push for moon exploration, with China, India, Israel, the US and other nations sending, or planing to send, robots there, but Toyota isn’t planning to get its rover there until 2029.

Mass Effect fans will notice that the vehicle looks a bit like the Mako from those games — let’s hope Toyota will add rocket boosters to a later version of this rover.

Toyota Motor Corp. is scoping out a new frontier: lunar rovers.
The Japan Aerospace Exploration Agency is teaming up with the country’s largest carmaker to build a six-wheeled self-driving transporter that can carry two humans for a distance of 10,000 kilometers. They’re aiming to land a vehicle on the moon in 2029.

The announcement comes less than a week after Tesla Inc. co-founder Elon Musk’s SpaceX docked a craft at the International Space Station. Toyota’s fuel-cell technology will power the rover, which will be big enough for two astronauts. They’ll be able to take their suits off and live in the vehicle as they explore the lunar surface, said Shigeki Terashi, an executive vice president at Toyota.

“It’s an extremely challenging project, and we have high hopes for Toyota’s technology,” Koichi Wakata, an astronaut who has flown in NASA’s Space Shuttle and served as the first Japanese commander of the International Space Station, said at a JAXA event.

Toyota has for years made robots that are designed to perform tasks such as housework, and to help people who have difficulty walking. Now it’s using its technology to conquer space. Roughly the size of two mini buses, the Toyota-JAXA lunar rover will be six meters long and have 13 square meters of habitable space.

The rover will use solar arrays and fuel cells to generate and store power. It will land on the moon before a human expedition arrives, and drive to meet them. The project calls for the rover to be used in four other exploration areas, so it will have to move around on its own to meet arriving astronauts.

The announcement comes at a time when China is ramping up it own space ambitions, thanks to an annual budget of $8 billion — second only to the U.S. Following a world-first landing on the far side of the moon in January, the world’s No. 2 economy is also making plans for a solar power station in space and a Mars probe is likely before the end of this decade.