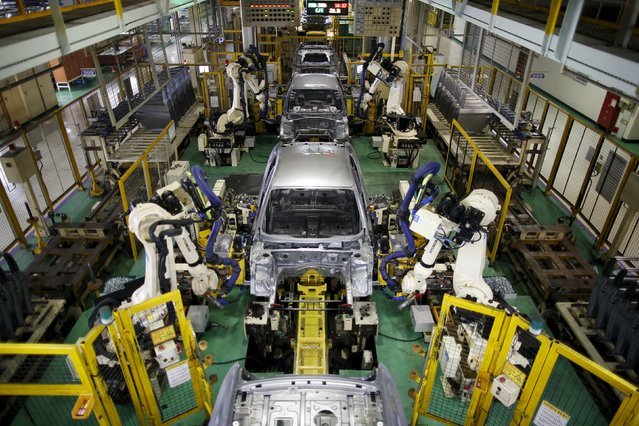 Hyundai Motor Co. said it will suspend production in South Korea, its biggest manufacturing base, becoming the first major automaker to do so outside of China due to disruption in the supply of parts resulting from the coronavirus outbreak.

Hyundai has seven factories in South Korea, catering to the local market and the U.S, Europe, Middle East and other countries. Hyundai’s production at home accounts for about 40 percent of its global output.

The automaker’s decision to halt assembly lines at home could delay supplies of popular and new crossovers such as the Palisade and Genesis GV80.

The production suspension follows a shortage of wiring harnesses which Hyundai sources mainly in China.

Two of the affected suppliers, Kyungshin and Yura Corp., said they were trying to boost production at their factories in South Korea and Southeast Asia to compensate for the disrupted supply from China.

They both also plan to resume production at their Chinese factories after Feb. 9.

“We are in an emergency,” a Kyungshin official told Reuters.

Hyundai’s decision to power down assembly lines at home could delay its recovery. The automaker recently turned in its best quarterly profit in over two years and said it was on track for higher profit margins, aided by more sales of crossovers such as the Palisade and Kona.

Hyundai already stopped production of the popular Palisade over the weekend due to a shortage of components from China.

Most of Hyundai’s South Korean factories will be fully idled from Feb. 7, while some production lines are expected to restart on Feb. 11 or Feb. 12, a union official said, declining to be identified given the sensitivity of the matter.

Schedules for suspension will vary by production line, a Hyundai spokeswoman said.

“The company is reviewing various measures to minimize the disruption of its operations, including seeking alternative suppliers in other regions,” Hyundai said in an emailed statement.

“Hyundai Motor will closely monitor developments in China and take all necessary measures to ensure the prompt normalization of its operations,” the automaker said.

Hyundai and its affiliate Kia Motors do not keep large stocks of the affected parts, said Lee Hang-koo, senior researcher at Korea Institute for Industrial Economics & Trade. “Hyundai and Kia may be more affected as they tend to import more parts from China than other global automakers,” Lee said.

Hyundai’s reliance on China has grown sharply as it built a huge production capacity in the country several years ago when its business was booming there, he added.

“South Korean parts makers followed and built their own facilities along with Hyundai,” Lee said.

Japanese trading house Mitsui & Co has also warned that the virus outbreak may slow manufacturing activities in automobiles and other sectors.

Manufacturers in China are struggling to get factory workers back to production lines due to extended holidays and suspension of public transport systems in some cities.

Many global automakers, including Tesla, Ford, PSA Group, Nissan and Honda, have already suspended production in China this week in line with government guidelines.

The flu-like virus has killed more than 420 people and spread to about two dozen nations, sparking fears for global economic growth and rattling markets, with Shanghai’s stock index losing about $400 billion in market value on Monday.