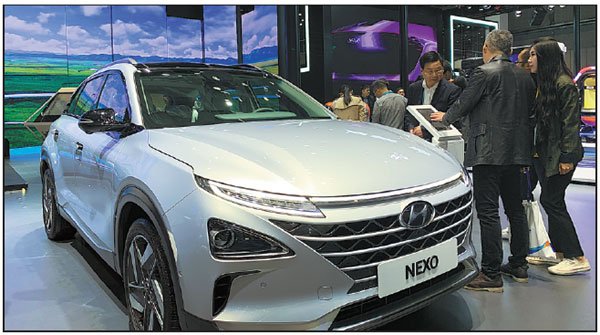 South Korea’s Hyundai Motor Group showcased its achievements in hydrogen fuel cell technology and electric vehicles at the second China International Import Expo, held from Tuesday to Sunday, in Shanghai, as part of the automaker’s efforts to strengthen its influence in future mobility in the world’s largest automobile market.

Hyundai’s Neptune concept vehicle is an example of the company’s research and development into hydrogen fuel cell technology and was exhibited at the expo.

The Neptune shows that Hyundai has extended the application of hydrogen fuel cell technology to commercial vehicles, according to the South Korean company.

The NEXO, another hydrogen fuel cell vehicle from Hyundai was another of the company’s models on show that attracted attention.

The model can be refilled with hydrogen in just five minutes and has a range of up to 800 kilometers, according to Hyundai.

Hyundai displayed its two fuel cell systems – the bigger of which can fuel the Veloster N ETCR, the automaker’s first electric racing car. And the other is a compact fuel cell system that can be used in industries such as rail and shipping.

The company said it will have an electric vehicle lineup of 23 models by 2025, and has a global sales target of 560,000 vehicles by the same year.

Hyundai’s affiliate Kia Motors debuted its high-end electric concept model Futuron at the second CIIE. The Futuron features chic design and high-level driver-machine interconnectivity, demonstrating Kia’s confidence and determination to lead the future mobility, especially in the Chinese market, according to the automaker.

The Soul EV, another electric model exhibited by Kia, demonstrated to visitors its commitment to make electric travel more efficient and convenient.

Coupled with world-leading wireless charging technology, the Soul EV will be able to be quick-charged through a ground induction device in the future, according to Kia.