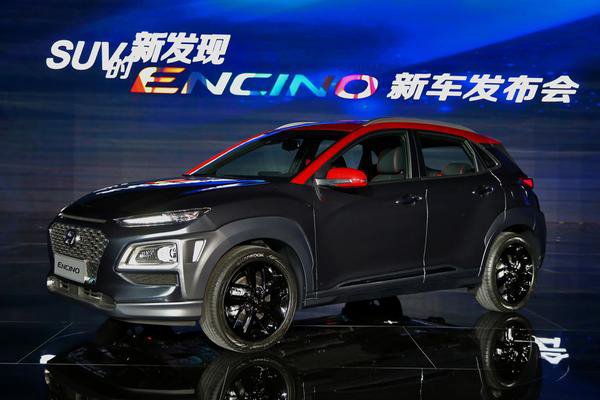 South Korea’s largest automaker Hyundai Motor Co., struggling to save its sagging business in China, has launched Encino, the localized version of its popular subcompact sport utility vehicle known as Kona in Korea.

Beijing Hyundai Motor Co., a joint venture between Hyundai Motor and China’s BAIC Motor, said Wednesday it held an opening ceremony for the Encino at the Shanghai World Expo Exhibition and Convention Center.

“The Encino SUV was developed with an aim to reflect the different lifestyle needs of young customers,” said Vice President Chung Eui-sun in his opening remarks at the ceremony. “We will continue releasing new models that meet the ever-shifting demands of Chinese customers.”

The Encino offers improved driving performance as it comes with a 1.6-liter gasoline turbo engine and a seven-speed dual clutch transmission. Embedded with smart sensors and other safety features, it also supports the connectivity software developed by Chinese tech giant Baidu. The car body has been made to look lower and wider compared to previous SUVs, a design change made specifically to appeal to Chinese customers, the company said.

The subcompact SUV is one of the fastest-growing segments in the Chinese auto market. Car sales have seen a threefold increase in four years, from 211,000 units in 2013 to 676,000 units last year. The number of models has also grown from five to 16 in the same period.

Beijing Hyundai sought to capture a piece of the lucrative subcompact SUV market by releasing the ix25 crossover in 2014, which has so far sold a total of 298,000 units in China as of last month.

In marketing the Encino to young Chinese customers, the company plans to sponsor a dance competition on China’s video streaming giant Youku and launch a set of digital advertising campaigns.

Hyundai Motor said a stream of clean vehicles, including a Sonata plug-in hybrid, are on the pipeline in the latter half of this year. It also plans to strengthen marketing efforts for its hydrogen fuel-cell SUV Nexo by holding events to promote its eco-friendly technologies.

Hilux Revo the flagship model has been temporarily suspended from production...