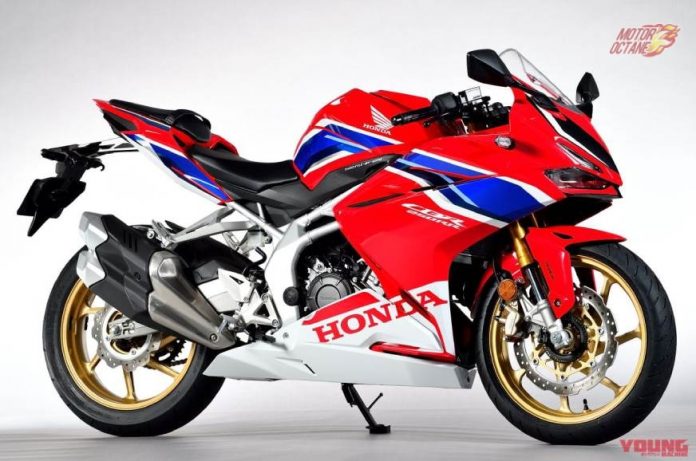 Let’s not confuse this bike with the Honda CBR 250R that we have in India. The Honda CBR 250RR is a bike that was a racetrack machine which was made production-ready. Honda has revealed the bike at Honda Virtual Motorcycle show. It’s an online event that Honda had to conduct as most of the gatherings in the world have been cancelled. Read further and know more about the Honda CBR 250RR.

Honda CBR 250RR Design
The Honda CBR 250 RR gets the design elements from the Honda Fireblade. The bike has been made sharp and aggressively looking. The faring of the vehicle is pointed at the front. The headlights are integrated in a striking manner and the LED daytime running lights are placed above it. The windshield looks rather short and the mirrors do not jut out as much. The wheel of the bike gets golden alloys and these look great with the HRC WorldSBK bike paint scheme. The front forks of the bike are golden in colour to match the wheel and also the disc brakes have a golden tinge on the inner rim.

The tank of the bike has a sculpted look with a good amount of shoulders. The badging of the Honda and CBR is in the form of stickers and there are not raised logos. The bike gets a dual-port exhaust at the back and a complete step-up racing type dual seat. This design has definitely evolved over time and the Honda CBR 250RR looks like a monster.

Specifications
The Honda CBR 250RR gets the most power-focused engine on a 250cc bike. The bike is a pocket rocket in true sense. The engine is a 4 cylinder power plant and it now packs 3 more horses. Its a 40 bhp bike and all this power come at 12500 rpm. The bike is ready to take on the Kawasaki ZX-25R. But it is also rumoured that the Kawasaki will make 45 BHP. You might be thinking what is so special about a 4 cylinder 250cc bike? Being a 4 cylinder the bike is a very high revving and fast-revving motor. Although the top speed might me not as much as a middleweight bike, the engine reaches those high speeds much faster.

The Honda CBR 250RR is also equipped with a slipper clutch and bi-directional quick-shifter. But these come as add on packages and will cost more. The bike also gets 3 riding modes which alter the power and change the traction control systems.

Honda CBR 250RR Price
The bike might not make it to India but we are expecting a price tag of Rs 5.05 lakhs (Indian Rupees). At this price, it will be a serious competitor to the Kawasaki ZX-25R. There is no other competition to this bike but we are expecting something from Triumph soon.