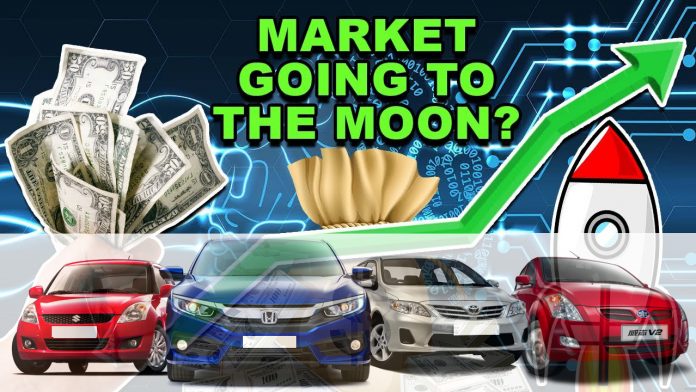 Pakistani rupee is getting constantly devalued against the US dollar. In the recent development, the dollar has reached to record high of PKR 128.26 in the open market. This is the fourth time that rupee has devalued against dollar in seven months. Meanwhile, the demand in the auto industry is increasing day by day and the rising cost of production due to rupee depreciation is affecting customers. And now it seems that due to a continuous increase in dollar price, the rate of cars once again will rise. It is expected that with an increase in vehicle prices, the prices of petroleum products might also surge following rupee devaluation.

Insight Securities Head of Research Zeeshan Afzal said: The rupee depreciation had a bigger impact on the price of imported vehicles as compared to vehicles assembled locally. He added “In the first phase of rupee devaluation, buyers tend to move from imported vehicles to locally assembled vehicles since car imports have a larger impact in terms of prices due to the increased value of the dollar. But there also comes a time, when it becomes difficult for buyers to buy a car because of an excessive increase in car prices due to massive devaluation. However, looking at the order books of auto assemblers at the moment, that time has not come yet.”

Commenting on the recent increase in the dollar price, Indus Motor Company CEO Ali Asghar Jamali hinted at the further price hike, saying if the latest massive rupee depreciation remained in place, then it would have an impact on everything.

However, Hyundai Nishat CFO Norez Abdullah said, “we cannot determine the impact at this point as we have not yet started operations.” He further said He, however, said it depended on the original equipment manufacturer (OEM) if they wanted to retain the volumes or the margins since it was a price-sensitive consumer market and consumers were likely to shift from one model/variant to another.

Earlier in this year, Indus Motors Company – Toyota, Honda Pakistan, Pak Suzuki and FAW has already increased their vehicles rates amid rupee devaluation. The local car makers Honda Pakistan, Pak Suzuki, Indus Motors Company has already increased the prices of their vehicle’s lineup thrice this year and it seems that the prices would soar again. On the other hand, Al-Haj has increased their vehicles prices twice so far in this year. The main reasons which the automakers give when asked about the increased rates are the devaluation of rupee against the US dollar. And that is happening again. So, it is highly possible that car prices will rise in the coming days. And if the local manufacturers do; increase the price, it would be interesting to see the reaction of the public.

Sources said since most parts of the cars are imported from Japan, their prices have been increased due to the devaluation of the rupee. They said even the raw material of locally assembled parts is imported from abroad. Sources claim that in absence of any check and balance from government and the fragile political situation might trigger car companies to further increase their prices in coming days.

Honda BR-V Minor Model Change is expected to be Launched Next...