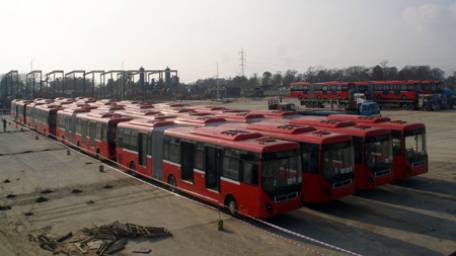 RAWALPINDI: The first batch of seventeen metro buses from Turkey arrived in the city to be plied on the multi billion rupees metro project between Rawalpindi and Islamabad.
The remaining buses are expected to reach ahead of the formal inauguration of the project, which is being delayed due to slow construction by the contractors for different reasons.
The Metro project which was to be completed by 31st December, 2014 was delayed till 31st January under the pretext that contractors could not carry out the work at desired pace due to sit ins by PTI and PAT.
The people traveling between the twin cities have pinned lot of hopes from the metro buses as their fares would be much cheaper and minimum time would be consumed in travel but they are irked by the continuing delay, also. An estimated two hundred thousand people would travel daily through the metro buses.
Experts however are of the opinion that there is need for integrated road networks to increase the rider ship of the metro bus project.
They said there should be feeder routes to enhance the utility of the project. They were of the opinion that it would be appropriate to start new routes from Chuhr Chowk to 9th Avenue to afford the people living along the IJP road to catch the metro bus near the double road crossing till the metro bus project is extended from 9th avenue to Chuhr chowk.
They said for the last about a year they have been facing difficulties in travelling between the twin cities due to the project as it is taking them around two and a half hours for one way travel between Saddar and Blue Ara Islamabad. They requested the Punjab Chief Minister Mian Shahbaz Sharif to make an urgent visit to the site as only he can ensure its timely completion by strong warning to the contractors.

Electric Rickshaws Will Hit The Roads of Pakistan Soon