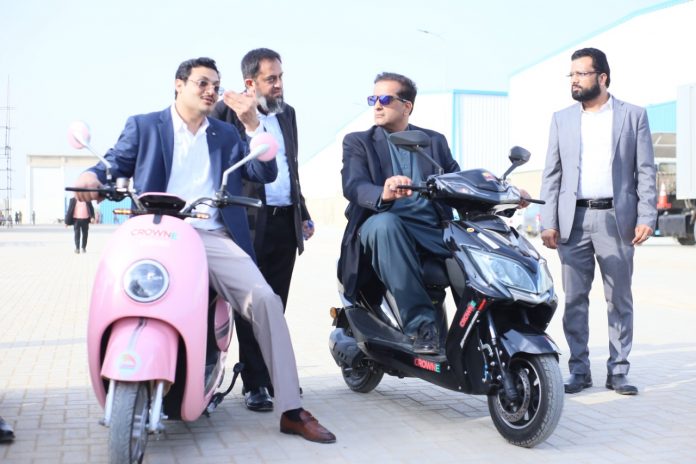 With this visit, Crown Group aims to strengthen the electric vehicle eco-system in Pakistan by promoting the use of rechargeable electric stations. Recently, Crown Group organized the market testing and sales display of its exclusive range of CROWNE Electric Vehicles which included two, three and four-wheelers, which be locally manufactured at the Groups Port Qasim facility on which PKR 2 billion has already been invested.

At the visit, Chairman Crown Group, Mr. M. Farhan Hanif stated: “It is an honour for us that the Federal Ministry is taking interest in our initiative. Our vision goes beyond the conventional ways travel is done in Pakistan. We aim to enable the masses of Pakistan to get affordable, economical and reliable vehicles for their everyday travel. Together, in coordination with the government, we will pursue our vision and aim and provide Pakistan with the technologies they need”.

Crown is a leading brand in the two and three wheeler industries of Pakistan and the only local consumer brand that exports to international markets while offering solutions for all segments of the industry within Pakistan. Crown Group has the largest network of spare parts and after sales service in Pakistan with 62,000 retailers, wholesalers and workshops on board.

He further stated that currently work on policy concessions and SROs is in the final stages and a revolution of electric vehicles is in the coming in the country. Moreover USAID has shown the possibility of saving $2 billion in one of its reports. This will also be beneficial since it will utilise our capacity of producing 4,000 MW power which is currently utilised. Malik Amin Aslam said that there are more than 200 million motorcycles and rickshaws in the country, while more than 3,000 CNG stations across the country can be used for electrical charging stations.

About Crown Group:
Crown Group has been the forerunner in two and three-wheeler automotive industries since 1963. Having the largest network of motorcycle parts across pan Pakistan, Crown deals in manufacturing motorcycles, tyres and tubes for more than 15 years.

FOR YOUR SAFETY, NEVER UNDERESTIMATE THE IMPORTANCE OF YOUR CAR’S LIGHTS!