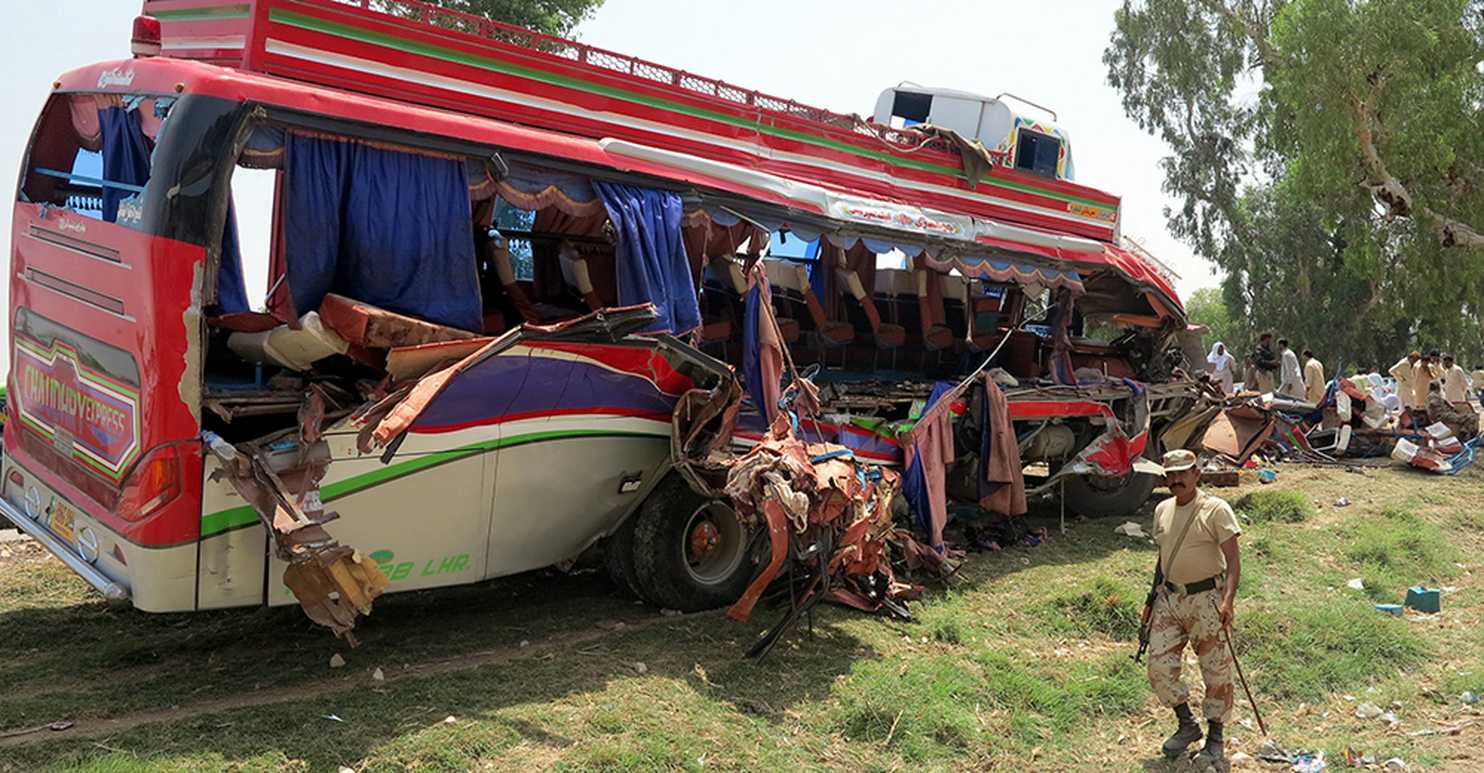 Pakistan is considered as a developing country in the world, but most of the major sectors of the country are still facing serious problems and haven’t made any significant progress over the years. The transport sector is one of these sectors where stunted growth due to lack of resources, accountability and meritless appointments in top positions are major concerns. The transport system has deteriorated badly in recent times, which has made commuting on the roads of Pakistan highly unsafe. Dangerous road accidents are recorded on daily basis in different parts of the country, some of which prove to be extremely deadly, just like the recent Ahmedpur Sharqia incident where more than 200 people lost their lives and many suffered serious injuries.

Ahmedpur Sharqia Incident and the Recent Surge in Road Fatalities

Many recent fatal road incidents and especially the Ahmedpur Sharqia incidentraises serious questions about the credibility of the concerned transport authorities and institutions. The Ahmedpur Sharqia incident that took place just one day before the Eid-ul-Fitr in Pakistan on 25th of Juneis one of the most horrific road incidents of Pakistan’s Transport History. It is an incident that took lives of hundreds of people and left many with disabilities for the lifetime. More than 200 people have reportedly died in this incident and many are still in a critical condition, fighting for their lives after suffering from burns caused by the fire that erupted when an oil tanker burst into flames at Ahmedpur East near Bahawalpur District of Pakistan. Such a massive loss of lives highlights the failure of many institutions of Pakistan and calls for a massive overhauling of the mindset of people who put their lives at stake to collect the oil leaking from the tanker.

Pakistan is facing serious road safety problems as the number of dangerous road accidents has increased incredibly in last few years due to a number of factors. From individuals to all concerned government bodies, everyone needs to contribute towards improving the road safety situation in Pakistan which is worsening day by day.

Let’s dig deep and find out what are the primary reasons for the consistent decline of the transport sector in Pakistan, which has accounted for fatal road incidents and caused fatalities all over the country.

Lack of Accountability in Major Institutions

The first and foremost reason for fatal road accidents in Pakistan is the lack of accountability in the transport sector of Pakistan,which allows different individuals, groups and private organizations to operate their illegal businesses without any fear of being held responsible. The oil supplying companies have manipulated this vulnerability of the system for years and feel no fear in violating the rules and regulations set by the government Pakistan for the supply and transfer of oil and other products in heavy tankers.

The tanker of Shell Petroleum that lost its balance in the Ahmedpur Sharqia incident was insured and even the 50,000-liter oil inside the tanker was insured so the incident didn’t really cause any financial loss to the company.  Accountability of such companies and proper investigation of such incidents is extremely important to make the accused pay for such criminal offences and improve the road safety situation for future.

One of the major reasons behind deadly road accidents in Pakistan is the poor system for issuing driving licenses to applicants. Anyone from anywhere can get a driving license on the basis of influence and money without even passing a driving test. The incapable and meritless system of issuing the license doesn’t really check the credentials and history of a driver and that gives a chance to individuals and organizations to manipulate the system with their unlawful activities.

In the Ahmedpur Sharqia incident, the investigation revealed that the driving license of the driver of the tanker was expired. Shell Petroleum has been fined with rupee 1 crore for this criminal negligence and asked to compensate the families of the dead with 1000,000 per person and those of injured with 500,000 per person. Had a proper monitoring system been in place to check the license of the tanker driver, the driver of the tanker would not have been allowed to drive and such an incident might have been avoided.

As discussed earlier, there is no proper system for monitoring and accountability of oil supplying companies, which means there is hardly any inspection of the large vehicles carrying oil and other products. Moreover, the absence of any system to train drivers for driving effectively in challenging road and weather conditions further deteriorates the safety situation on the roads. Unknown commercial vehicles with no proper health certificates are a serious threat to the safety of commuters on the roads. The fitness certificate of the oil tanker driver in the Ahmedpur Sharqia incident was also fake. The failure of concerned departments to issue the fitness certificates to vehicles, especially the large commercial vehicles is one of the major reasons for fatal road incidents in Pakistan.

The lack of monitoring of vehicles on highways and poor road surveillance of traffic authorities is another major reason for road accidents in Pakistan.  The highway traffic Police has been declared as equally responsible for the Ahmedpur Sharqia incident in the investigation report as the traffic body couldn’t manage to stop people from collecting oil that was leaking from the tanker. The highway police also failed to identify that the truck was carrying more oil than its capacitywhile it was travelling from Karachi to Vehari and it’s a huge failure that eventually became a reason for a massive life loss.

According to the investigation report, it was a four-excel tanker that was carrying 50,000-liters of petrol while a 5-excel tanker is required to carry such a huge quantity of oil. According to reports, these oil tanker incidents happen everyday in Pakistan but hardly any of them gets reported like the AhmedpurSharqia incident because they don’t prove to be deadly. These incidents clearly highlight the lack of resourcefulness and inability of Pakistan’s major traffic bodies to check and monitor the health of heavy commercial vehicles on merit.

The road and transport authorities have failed to improve the road and transport infrastructure in Pakistandespite some horrific road incidents that have taken place in recent times.  Government issues funds for the improvement of the infrastructure but the miserable situation of roads in Pakistan hardly improves. The provincial governments show their interest in making new and better roads but the construction process, once started, takes too long to complete and that makes driving difficult asunder-maintenance roads demandthe extra attention of drivers. Drivers have to change their route or divert from lanes because of the construction underway and this is also one of the reasons why drivers feel frustrated and make fatal driving mistakes.

Lack of Awareness among drivers

One very important reason for fatal road accidents in Pakistan is the lack of awareness about traffic rules and traffic violations among the drivers. Generally, the drivers do not follow the road safety practices because they are not properly trained to drive and the monitoring of traffic authorities is too week to catch traffic offenders and charge them with heavy traffic fines. The vulnerable nature of the traffic system allows drivers to take traffic rules for granted and this is what leads to fatal road accidents.

Ahmedpur Sharqia incident is one of the most horrifying incidents in the transport history of Pakistan, but it is surely not first incident of its kind. The incident has got the attention of media, government and legal bodies only because of the degree of life loss involved in this incident. The government should make the concerned transport and traffic departments learn from their failures and improve the accountability in the institutions as this is the only way to avoid terrifying road incidents from happening.

The road and traffic system needs to be completely revamped in order to improve the road safety levels and a gradual improvement in the system must be the target of authorities in the coming years to make Pakistan’s roads safer than ever for commuting.