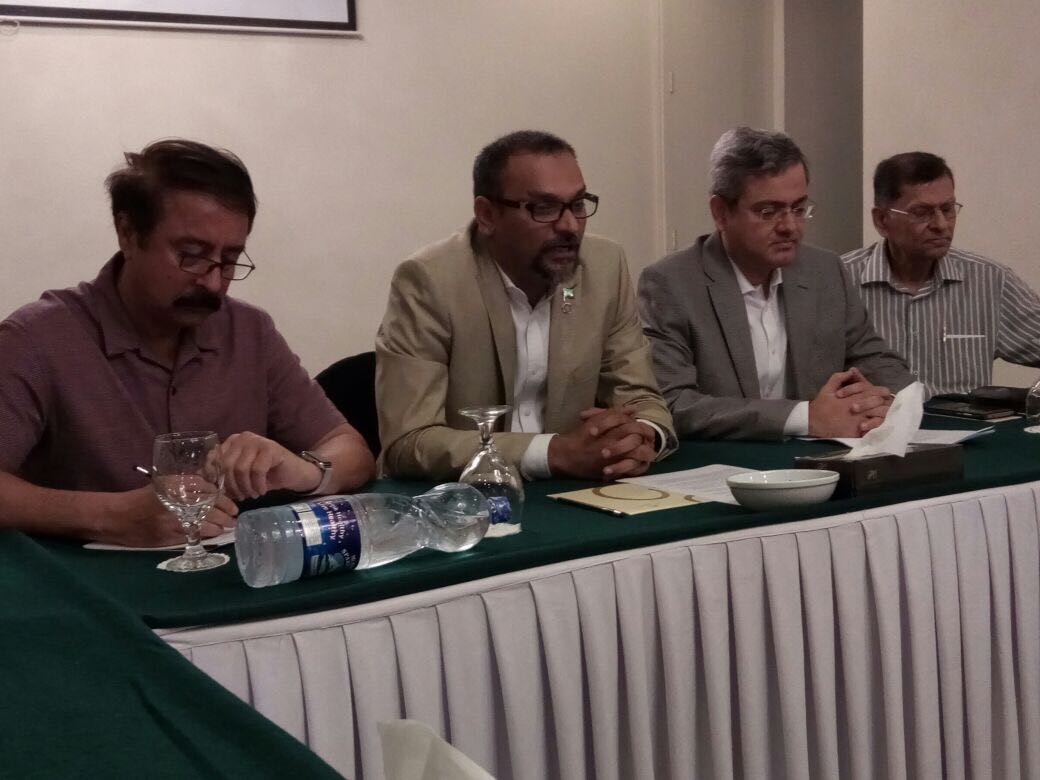 The Pakistan Association of Automotive Parts & Accessories Manufacturers (PAAPAM) has termed the decision to dissolve the Engineering Development Board (EDB) as a recipe for disaster for the country’s industry.

Mashood Ali Khan, Chairman PAAPAM, flanked by former Chairmans Mr. Shariq Suhail, Mr. Munir K Bana and Mr. Aamir Allawal of the Association, expressed their shock on the discussion held in a recent meeting of the Cabinet Committee on Energy (CCoE) during which EDB was criticized for delaying approvals of CPEC power projects and supposedly involved in rampant corruption. This led to a directive from the Prime Minister to dissolve the organization since it was no longer able to serve any useful purpose

Interestingly, through an amendment made in the Finance Bill 2016-17, the requirement of EDB’s verification for availing duty exemption has already been removed for IPP projects above 25MW. Therefore, apparently,  the CCoE may have been wrongly briefed about ‘so called’ delay in processing of power project proposals by EDB. In fact, EDB’s role for processing cases of power projects over 25MW has been handed over to the Ministry of Water & Power. In the light of this scenario, the CCoE needs to review its uncalled for criticism and unjust position taken on EDB’s performance.

PAAPAM is a representative body of 400 auto parts manufacturers & vendors located all over Pakistan and provides direct & indirect employment to almost 3 million Pakistanis; it is also one of the largest “fully documented” sectors in the country. PAAPAM members have invested heavily for manufacture of automobile parts for global auto assemblers operating in Pakistan. Resultantly, localization of automobile components has touched a record high in the country with 55%~70% of parts used in passenger cars being manufactured locally

At a press briefing held at a local hotel in Karachi on 6th July 2017, Chairman PAAPAM, Mashood Ali Khan said that the auto industry has been engaging with EDB ever since its inception in 1995. Over these 20 years, there has never been a single scandal of corruption or malpractice at the EDB. On the contrary, the organization has played a major role in nurturing the domestic auto industry and promoting the growth in localization of auto parts in Pakistan (and saving valuable foreign exchange for the country).

In 1995, hardly 10%~15% of parts for passenger cars were produced locally. Today this figure has touched 70%. Similar trends were witnessed in case of motorcycles, trucks, buses & tractors. The industry was able to achieve these milestones only due to diligent implementation of deletion programs and tariff based systems by the EDB

The areas for which EDB needs to be complimented include strict implementation of deletion programs in the 1990s, preparation of a WTO-compliant Tariff Based System & formulation of the first auto policy in 2007, ensuring continuous growth in localization of automobile components, diligently monitoring that locally produced parts are not  imported at concessionary rates of duty, revival of trucks/buses manufacturing by controlling smuggling/misdeclaration, preparation of the second auto policy in 2016 and efficient management of auto sector regulations (including SROs 655, 656 & 693)

Chairman PAAPAM pointed out that unfortunately, since 2010, the Government has failed to give due importance to EDB or the engineering sector. EDB operated without a CEO for almost 3 years between 2012~2015. Finally, once again, EDB is without a permanent CEO since March 2017. How can one expect any organization to remain functional without a full-time & competent Chief Executive Officer

Mashood commented that since 2010, the Government did not take any steps for building capacity of this institution to serve the engineering sector. Instead, EDB was kept under-staffed and under constant pressure to operate with limited resources

PAAPAM officials assured the Prime Minister that there is no merit in the corruption allegations being levelled against EDB officials. Our members can vouch that they have not experienced any instances of corruption at any level in EDB, although all of them have an ongoing working relationship with the organization ever since its inception

Therefore, it would be an unwise step for a pro-industry Government, led by Prime Minister Mian Muhammad Nawaz Sharif, to move towards dissolving an organization on the basis of hearsay spread by groups with vested interests. Instead, considering that Pakistan’s economy is at a take-off stage, it would be prudent to appoint a professional CEO at EDB and provide it with the necessary resources to ensure its role as a catalyst for growth of the domestic Engineering Industry.

PAAPAM Chairman particularly pointed out that the auto industry is  passing through a critical phase, where the industry has bounced back and new entrants have entered the field. EDB is fully geared to assist the new entrants in meeting the government’s auto policy framework and also monitor and report to the federal government on their achievements from time to time.

PAAPAM appealed to the Honorable Prime Minister that, inspite of his hectic schedule, he may kindly grant a hearing to the Association and allow them an opportunity of explaining and clarifying the grave issues involved, so that he may be fully apprised of the facts and figures. We assure the Prime Minister that, we have full faith in him that he will not take any decision which could be detrimental to the interest of this nation, specially without granting a hearing to all the affected parties.

We look forward to an earliest meeting with the Prime Minister.

Future of Scooty in Pakistan