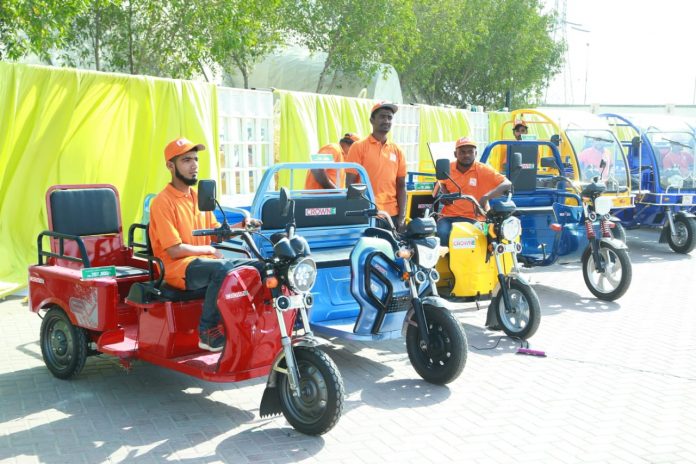 Crown Group has been making auto parts since 1963. It displayed a number of environmentally friendly vehicles, including motorcycles, auto-rickshaws, cars and ambulances, which it says are energy efficient.

Crown Group recently organized the market testing and sales display of its exclusive range of CROWNE Electric Vehicles. These vehicles include two, three and four-wheelers and will enable people to drive 1 km in only Rs. 1.25.

The starting price for an electric car, a pilot project, is Rs400,000. It’s a two-door hatchback with a seating capacity of two persons. The prices of the rickshaws and motorcycles are between Rs200,000 and Rs55,000 respectively.

Moreover, the three-wheeler rickshaw (two-in-one) comes in both electric and engine equipped with manual switching options at a display price of PKR 300,000 and 250,000 respectively.

The electric vehicles will be locally manufactured at the Groups newly built 26 acre Port Qasim facility. Having an initial production capacity of 120,000 units per annum, the Group has already invested Rs. 2 billion on the plant in the first phase.

Through this project, the economy will certainly get a boost as it will great more jobs and more entrepreneurial opportunities for the public. it will also provide affordable means of transportation as well.

Eight Chinese companies have partnered with the Crown Group in joint ventures and the company is ready to expand production as soon as the government implements its electric vehicle policy.

‘If the government keeps its word on the electric vehicle policy, the custom duty on imports of auto-parts will only be 1% while the sales tax will not exceed 5%’, said the Chairperson.

Crown group is known for its leadership in the spare parts market and services all over Pakistan and now it has invested Rs.2 billion to set up its EV manufacturing plant.