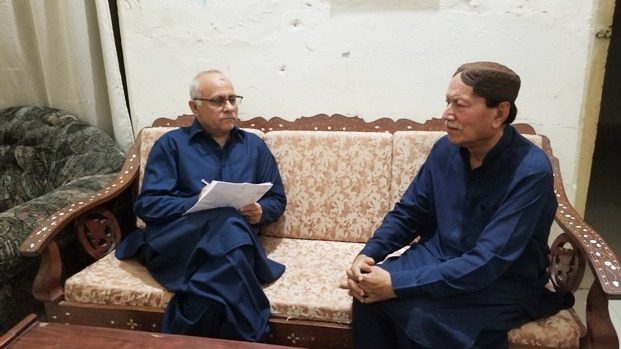 Mr. Mansoor Rizvi, a member of our editorial board travelled to Sukkur to take this very important interview from Mr. Hassan Chachar (Senior Vice President Sindh Chamber of Agriculture) to apprise our readers about the state of Agriculture in the province of Sindh. Automark is very thankful to Mr. Chachar for giving his precious time for an interview. He has shed light on many important techniques in agriculture that are not happening thus needing immediate attention by the Sindh Government to improve agriculture in the province. We trust that the honorable Chief Minister who is a very qualified person, a position holder in civil engineering from NED, and a graduate of Stanford University will immediately take notice of the concerns discussed in the interview.

Q1. What are the basic issues that we are facing in agriculture in Sindh?
A. There are many issues but the main oneis the non-fixation of commodity prices(agricultural products) by the Government. This has not been done for the last many years. As a result, our farmers face a lot of difficulty in marketing their commodities (Wheat, rice and sugarcane) in the absence of support prices. They are then left at the mercy of marketers and subsequently become a subject of massive exploitation by these profiteers. While the government does not fix the prices, so they do not purchase wheat from the farmers. This situation has further been exploited by the agents. Some ten years back Govt use to fix prices of various commodities.This year sugarcane prices were fixed at 182Rs/maund but sugarcane mill owners did not honor it. The millowners even did not make the payments to the growers of the prices they agreed to pay. They finally paid whatever they liked to with full of harassment and blackmailing to growers.Also, the rice growers met with the same fate and badly exploited by the agents (shopkeepers).
The situation of farmers is very dismal,they are suffering losses of millions of Rupees due to no support prices, exploitation by the hands of agents, high input cost, shortage of water, adulterated pesticides and high cost of fertilizer. Sindh is also suffering due to water scarcity because its justifiableshare of water is not given due to poor water management by the Government. The shortage of water is turning agricultural lands of Sindh particularly at tail end barren. The government machinery of Sindh is no good to check the sale of adulterated pesticides and seeds causing tremendous loss of yield and brings huge financial losses to the farmers. Fertilizer prices are out of reach of farmers because fertilizers companies increase prices without any justification. The retailers took its advantage and add further into the price. This makes farmers life difficult because they are compelled to pay high prices. Most of the time they are not able to apply prescribed amount of fertilizerwhich compromise yield. In a nut shell government do not support small growers (around 93% farmers own up to 12.5 acres of land) in terms of loaning. No subsidy is given to support agricultural mechanization (Tractors, tube well, Harvesters and other related agricultural equipment.

Q2. How these issues could be resolved?
A. Sindh Government does not have any concrete Agricultural policy. There should be a proper agricultural policy document to be drafted involving all the stake holders to achieve a unified approach as what steps to be taken to improve, strengthen and reinforce agriculture in Sindh. Unfortunately, the controlling authoritiesto check adulterated pesticides, seeds and other vital agricultural inputs are either non-functional or not very upright to perform their task honestly with due diligence. Unfortunately, those who matter care less about national development and its prosperity rather personal gains and benefits. In fact, easy loaning facility should be provided to small growers (responsibility of Sindh/Federal Government) to encourage them to grow more. Production loans are given to some extent, but development loans are totally non-existent on the pretext that loans will be mis-utilized, and recovery would be difficult or rather impossible from farmers (small and moderate farmers) so theyare not given any loans. This tendency is causing huge loss to agriculture and nation. We have around 90% small farmers owning less than 12.5 acres. However, if we analyze the bad debts situation it’s all coming from politicians, big businesses and big landlords. Some 15 years ago small growers were given loans which has resulted in improvement in Agriculture. Since our Governments started giving loans tobig people instead of small growers the bad debts increased manifold and banks were left with no money to disburse to small growers. There is a tremendous potential of fish farming, poultry farming and livestock that could be carried out by small farmers provided easy loans are offered to them. Various foreign companies have offered 30% Equity-70% foreign investment proposal to materialize these projects. The reason it did not work out because small farmers do not have money to even pay their 30% share.

Q3. Why particularly Sindh province is behind in Agriculture comparing to neighboring province? What is your professional advice to Sindh Government?
A. The answer is very simple, Sindh Government has never tried to understand the issues of small and medium growers, you can say lack of total awareness about the challenges being faced by the farmers. Sindh growers were never provided any technical assistance to learn new farming techniques. They have no laser levelling while with a little exaggeration I can say Punjab is now fully laser levelled. The agricultural extension department is not performing their duties effectively as a result farmers knowledge on agriculture like right sowing/harvesting time, need of fertilizer (right quantity), selection of proper seed and quantity is not known to them. No check on the sale of adulterated pesticides, seeds and fertilizers. You must have heard that many a times our rice crops got destroyed completely because of the adulterated pesticide application. You can compare the yield of different crops in Sindh with Punjab. The difference is almost double.

Q4. What are the main reasons of water crises in Sindh? What could be the possible resolution?
A. Small Dams should be constructed in Sindh to store water. This will help in mitigating the water shortage in Sindh. Another major area of concern is due to the sheer violation of inter-provincial agreement by the Indus river system authority. According to the agreement Thal and Chashma link canals are flood canals, water will only be released to Punjab from these canals when (source of water is Tarbela Dam ) all barrages of Sindh got full supply or there is an emergency flood situation(water exceeds capacity of canals). On the contrary, Punjab keeps these canals running which helps irrigating their barren areas while Sindhnot only get deprived of their legitimate share but gets no water at the tail-end. It was agreed at the time of the construction of these canals that water to these canals could be released only with the consent of Sindh. But during the rule of Gen Zia, Punjab Governor Gen Ghulam Jilani refused to accept the agreement and ordered water release. During the tenure of previous Government when the KP government was under Imran Khan did not support the Sindh stand because Mr. Khan wanted to construct the Kalabagh Dam. Sindh Irrigation department, unfortunately, miserably failed in pursuing this matter efficiently and effectively with the Government. This is due to lack of national approach in them. Their focus is to oblige big landlords to gain personal favors instead of raising voice for poor peasants. Concisely speaking all minors in Sindh (tail-end) are suffering with acute water shortage.

Q5. What is your point of view about the construction of Kalabagh Dam?
A.There are many for and against points about Kalabagh Dam. Sindh, Balochistan, and Khyber Pakhtunkwa are generally not in favor of Kalabagh Dam. This could be better described by quoting the common man saying that “Construction of Kalabagh Dam will turn Sindh and Baluchistan into desert while KPK will be submerged into water.
In my opinion the major road block is the trust deficit. In view of my above description where trust is being breached by running the flood canals to deprive Sindh of its legitimate share of water, who will guarantee that this will not be repeated after the construction of Kalabagh dam. Geographically the location of Kalabagh dam is more favorableto conveniently construct parallel canals from there. The opening of the canals from Kalabagh dam will be extremely brutal for Sindh and literally this will turn this province into desert. Other than this there are many socio-economic and political reasons that are not favorable for Sind. The Sindhi wetlands such as the Keenjhar and Haleji Lakes will dry up. Kalabagh Dam has the potential to make the agrarian Indus Basin barren and unproductive by preventing flooding and situation in riverine areas. It will also damage to the Indus Delta and animal habitat.
However, we are greatly in favor of the construction of Bhasha Dam because the terrain in the surrounding is not very conducive to take out canals to steal our water.

Q6. It is said that Feudal in Sindh and Sardars in Baluchistan are the real reason of the poor state of these two provinces. Is this true? What is resolution in your opinion.
A. No one can deny it, but we must understand that it’s due to their insecurity coming from the feeling that by developing these areas their hegemony will be jeopardized. What could be done to eliminate this fear from their head? The only answer is education. At present the state of education in Sindh is very dismal because besides having schools, colleges and universities in the province the standard of education is so poor that it became difficult to differentiate between an educated and non-educated person. This has happened in the past 20 years due to greater involvement of political parties in the educational institutes.

New Government should do more to promote electric vehicles