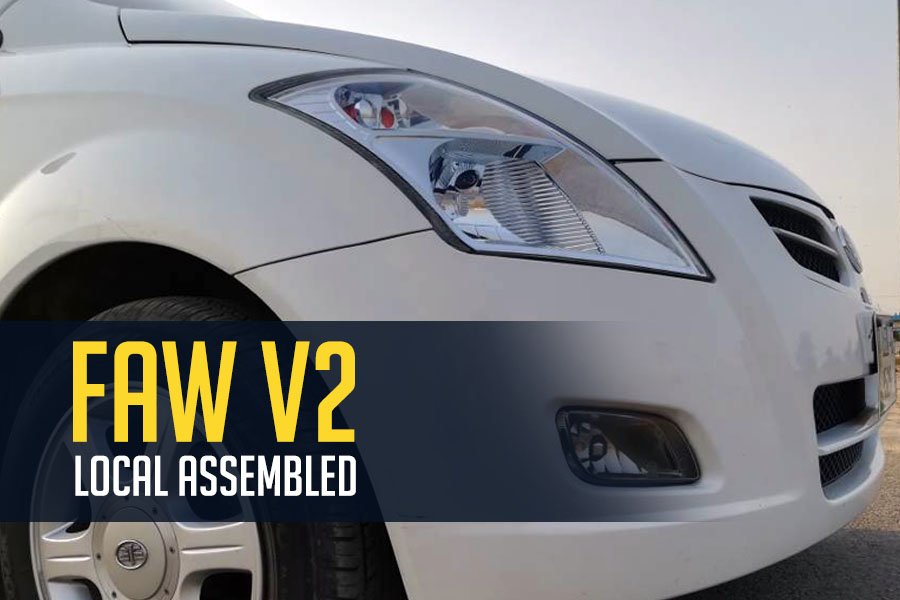 In a delightful new development for car enthusiasts in Pakistan, the Al-Haj FAW Group has confirmed the plans to start the local assembly of its popular compact hatchback, FAW V2 in Pakistan. The Group has now officially stopped the import of CBU units and bookings are opened for the locally assembled FAW V2. This will be a unique achievement for Al-Haj FAW Group as the import of CKD (Complete Knock-Down) units from China to Pakistan is a difficult process, but the Group aims to satisfy its customer base in Pakistan by offering the locally assembled FAW V2 without any change in its price.

FAW is a renowned Chinese car maker in the world. The company has a strong reputation for manufacturing vehicles that follow the global standards for automotive engineering. In a joint venture with the FAW Group of China, the Al-Haj Group of Pakistan launched the FAW V2 Hatchback for the first time in Pakistan in 2015. In the start, the Al-Haj FAW Group only imported the CBU units from China and sold the Hatchback at a highly affordable price of Rs. 1,049,000 in Pakistan. The Group has now decided to take it one step further to satisfy their growing customer base in the country and has confirmed its plans to launch the locally assembled FAW V2 in Pakistan. V2 is going to assemble at state of the art assembly plant with recently established E.D. coating and baking facilities which is the only facility available in Pakistan with Chinese company.

How the Al-Haj Faw Plans to Assemble FAW V2 in Pakistan?

There had been rumors going around that Al-Haj FAW Group had dismissed its plans to start the local assembly of FAW V2 Hatchback in Pakistan after the Group was denied of Green Field Investment Request by the Government of Pakistan. However, it has now been confirmed by Al-Haj FAW Group in an exclusive conversation with Automark Magazine Pakistan that the inauguration event for local assembly of FAW V2 will be held in August 2017 and the Group will launch the locally assembled FAW V2 in line with the new Auto Development Policy 2016-21 of the Pakistan Government.

The Director Marketing Division of Al-Haj FAW Group, Mr. Farhan Hafiz told Automark that the pre-booking of the locally assembled FAW V2 has already started and customers in Pakistan are welcomed to book the FAW V2. He also confirmed that it will just not be an event to kick-start the venture of local assembly of FAW V2 in Pakistan, but it will also be a launching platform for most of the pre-booked FAW V2 cars. He said that the Group will make its best efforts to deliver the maximum number of pre-booked vehicles to customers at the event and aims to complete the delivery of all pre-booked vehicles within two to three months of the launch event.

The launch of locally assembled FAW V2 will be a huge breakthrough for the Al-Haj FAW Group as the high-in-demand FAW V2 will be launched without any change in its earlier price. According to the Mr.Farhan Hafiz, the Al-Haj FAW Group is only focusing on the customer satisfaction at the expense of many benefits that the Group could achieve by launching the locally assembled FAW V2 at a higher price than before.

The supply of CKD units from China to Pakistan is a difficult as well as an expensive process, but Al-Haj FAW Group is dedicated to putting their best foot forward in bringing the locally assembled FAW V2 in Pakistan that will satisfy their customer base which is growing at a rapid pace already.

In this way, it offers a great opportunity to customers to buy one of the high-performance hatchbacks in Pakistan at an affordable price. It will be a big stepping-stone for Al-Haj FAW Group towards achieving seamless growth in a highly competitive market of Pakistan’s the local assembly of FAW V2 will ensure lower maintenance costs and easy availability of spare parts, two factors that are mostly considered by the car buyers in Pakistan whenever they look to buy their next car.

Competition Faced by the FAW V2 in Local Market of Pakistan

A common perception in the automotive industry and among the car enthusiasts in Pakistan is that FAW V2 has its serious competition with the likes of Suzuki Swift, Suzuki New Cultus and other similar vehicles. Al-Haj FAW Group though denies it and stresses on the fact that FAW V2 doesn’t compete against any giants of the auto industry as yet.

Farhan Hafiz was of the view that it’s true that many well-reputed brands are offering their vehicles in the hatchback segment, but FAW V2 is a better option because of its affordable price, powerful 1300cc engine, fuel efficiency, modern body style, enhanced driver and passenger safety and a desirable driving experience. He added that Al-Haj FAW Group expects to give tough competition to other car brands in the similar segment in next five years, but right now the main focus of the Group is only on widening the customer base in Pakistan by catering to the demands of car buyers.

Billions lost in taxes due to used cars import halted