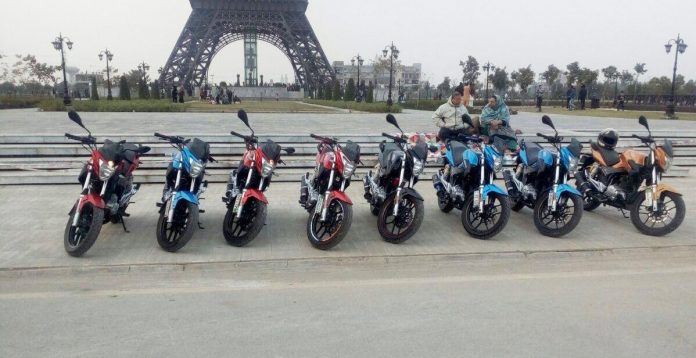 December has always remained the slowest month for the bike industry in terms of sales and production, but this 2018’s December may emerge as the worst month for the whole auto sector of Pakistan.

By the end of December till the finalization of this write up, car sales of three assemblers may remain depressed from July to December 2018.

Branded bike makers like Yamaha, Suzuki and Honda are selling their bikes through various promotional schemes to their dealers and not to the customers.
Ahead of start of New Year, Chinese based assemblers are getting so many notices from the Federal Board of Revenue (FBR). Besides, FIA is more active over telegraphic transfer of US dollars unofficially or through Dubai channels, thus causing anxiety among the businessmen.

So far, sales of Chinese bike assemblers have plunged by more than 50 per cent in December 2018 alone while around 30 per cent sales drop had been witnessed in the last quarter of 2018, chairman Association of Pakistan Motorcycle Assemblers (APMA), Mohammad Sabir Sheikh claimed.

He said bike assemblers have received good news that the advisor to Prime Minister on Industries and Production, Abdul Razzak Dawood is making new policies for the small and medium enterprises (SMEs) and also for the bike industries of Pakistan.

APMA chief says Pakistan badly needs a good and long term industrial policy for the SMEs especially because the government believes that the pace of industrialization and employment can be boosted by promoting small and medium enterprises. The industry needs uniform taxation policies and valuation of goods at import stage, limited issuance of SROs as auto industry is working under five different policies and SROs. “The SRO should be one and final,” Sabir said.

Zero per cent duty on raw materials is a right step so far but duty on assemblies, sub assemblies, components and sub components should be treated at par with complete assembly. The above procedure only encourages under invoicing, misdeclartion and misuse of SROs.

From December 2017 to December 2018, rupee lost its value by 24 per cent against the dollar, thus pushing up cost of imports. As a result, bike assemblers especially Atlas Honda Limited had surged bike prices by at least six times in 2018 while Chinese bike assemblers also followed the suit.

Increase in bike prices had also hit the sales of some assemblers thus shifting a number of buyers towards installment sales. Cash buying is slowly dying due to buyers’ rising cost of living.

Consumers had already been hit hard due to rising cost of utility bills on account of increase in gas and power rates coupled with soaring petrol prices. Devaluation has played havoc with the prices of essential items also, Sabir said.

The year 2018 witnessed some cosmetic changes in branded and Chinese bikes. Only Pak Suzuki unveiled GR150cc model at Rs 219,000 during January 2018. This bike is being rolled out on almost 100 per cent imported parts.

Sabir said irrespective of economic and political turmoil, consumers have always preferred to have two-wheeler as the only cheaper mode of transportation. Many people especially those travelling in public transport had switched over to bikes.

High petrol prices coupled with ineffective transport system had kept bike demand high despite frequent rise in prices. Buyers know that at least it is better to go on bike with one litre of petrol rather than wasting time on public transport and paying high fares. Besides, ongoing construction works at different arteries of the city have also created huge problems for commuters owing to massive traffic jams. In such situation, bike is the ideal transport in reaching the destination irrespective of long distance.

On 2019, Sabir fears that in case one US dollar reaches to Rs 150 then this would also prove devastating for the local assemblers as hi tech parts are still being imported despite achieving higher localization.

He said after some strict measures on transfer of US dollar via unofficial telegraphic transfer coupled with transfer of data of declared values by the Chinese exporters of auto parts, the government would earn more revenues but the cost of industries would rise.
Some cash rich people are also seen purchasing heavy used bikes of 400-500cc but the trend may shrink as the government has put a ban on purchasing vehicle beyond 200cc. As a result, import of these bikes may record a big fall in coming months.

Some leading assemblers have also introduced imported brand new heavy bikes but due to high prices these bikes are lifted by the traffic police departments and other security agencies rather than customers.

Sabir expressed surprise over the media campaign of Pakistan Association of Automotive Parts and Accessories Manufacturers Association (PAAPAM) in which a very dismal picture of the auto sector was presented.

PAAPAM has claimed that bike production has declined by 30 per cent followed by 60 per cent fall in tractor production and 35 per cent decline in car production.
He said PAAPAM had been notorious in misguiding the previous governments and this time it has again come up with hollow statistics without mentioning time period in drastic fall in car, tractor and bike production.

Another hilarious claim that restriction on non filers has reduced our customer base to only 1.4 million persons besides curtailing government’s revenues making industry unsustainable is also a sheer lie when Federal Board of Revenue (FBR) and even car makers had revealed in the media that number of income tax filers had increased.

PAAPAM said it has lost over 12,000 jobs in the last three months and would lose another 50,000 soon which is hard to digest keeping in view of figures of Pakistan Automotive Manufacturers Association (PAMA). Bike production and sales have increased in the last five months followed by satisfactory sales in cars.

Sabir said truck sector had been facing recession for the last five months on which PAAPAM did not bother to mention in its media campaign.
“I do not know what PAAPAM is going to gain from its negative media campaign from the government while the market reality is totally reverse from vendors’ claim,” APMA chief said.

The July-December 2018 figures will give a clear picture of sales and production trend keeping in view ban on non filers from buying vehicles, rupee devaluation against the dollar and high interest. PAAPAM has come out with baseless claims in which no period has been mentioned relating to steep fall in production of cars, bikes and tractors.

He urged the government to counter check the PAAPAM claim otherwise the vendors would succeed in their mission in getting some decisions in their favor. In order to provide transport facilities, the Government of Punjab has announced to provide motorbikes and scooters to female students on easy installments.

Punjab Education Foundation Chairman Wasiq Qayyum Abbasi said the scheme would start at the beginning of 2019 which is aimed at providing easy travelling facility to female students in the whole province. However, the procedure as to how one can apply and get the bike has not revealed yet but hopefully, further information regarding the scheme would be available in due time.

Wasiq Qayyum Abbasi further said that bikes and scooters would be provided to the female university students and travel vouchers will be provided to the female students who are studying in metric and intermediate classes so they don’t have to spend money on travelling and reach school on time. The Chairman also discussed that the bicycles will be given to male students. He also told that there are 550 colleges and 53,000 schools, where almost 50 million students study.

This is not the first time that the government has taken such initiative to provide bikes to women, previously, under the Women on Wheels project, hundreds of subsidised bikes were given to females. In the first phase of the initiative, only the women from Lahore, Faisalabad, Multan, Sargodha, and Rawalpindi were allowed to apply for the scheme. However, the government is committed to expanding this initiative in other districts of Punjab as well.

The Women on wheels initiative started back in November 2015 with an aim to help women to learn bike riding.
Nonetheless, there is no such initiative has been taken so far in other provinces. Keeping in view the dense population and chaotic traffic situation of other provinces like Sindh, the federal government should also start this initiative to facilitate the transportation means for young girls which empower them to go to the institutions for studies without any break.

Vision for SME Development in Pakistan – A New Economic Era